A night out at ‘Honey Pig BBQ’ 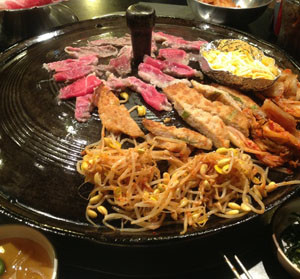 Korean food is at the top of my favorite Asian cuisines next to Japanese and Thai food, as it is relatively meaty and healthy (much to a teenager’s advantage).  As South Korea’s popularity continues to rise such as the ever growing KPop wave and roles in global corporations, Korean food has become more of an interest to foreigners. Korean cuisine is dependent on the staples of rice, vegetables, and meat. The delicious dishes have developed from the food that is agriculturally available.

The Honey Pig BBQ, a Korean BBQ place, serves healthy portions of meat and vegetables, is tucked in a corner where most would ignore the static neon signs, but I saw satisfied, laughing customers leaving which intrigued me. With curiosity, I entered for a dinner with my mother.

The cloth menu included sets, bentos, specials, traditional Korean stews, and an all you can eat portion. Being only with my mother, we ordered the B Set for two ($39.99) which included bulgogi (marinated beef), brisket, tofu soup, rice, and soju (alcohol) or a choice of soda. We decided to stray away from any intestines or samgyeopsal (pork belly), which happens to be my mother’s favorite, because we surely wouldn’t finish it.

Korean BBQ is different from American standards. Instead of braised and marinated in a thick sauce and grilled to order, Korean BBQ has either fresh meat or is marinated in asian spices. The customers either grill it themselves on the table or the waiters grill it for them.

While waiting, the waiter placed a plethora of banchan (Korean side dishes) and they were spinach, kimchi, radish, korean pancake, corn, and salad. The waiters themselves grilled the meat alongside kimchi and bean sprouts on the table. We had the choice of ordering regular steamed rice or fried rice that was mixed on the grill and then mixed with the meat and banchan we ordered. Cutting down on carbohydrates, we decided against the fried rice.

Despite the hearty dinner, it was low in fats and carbohydrates, compared to other chain restaurants. The fat easily drained down the grill and I stuffed my mouth with the energizing banchan. I never knew how well hot kimchi and bean paste went with the juiciness of the meat. The restaurant’s bulgogi is now my favorite–it wasn’t overpoweringly sweet and the meat was remarkably tender.

Since the waiters brought meat literally on a silver platter, although unnecessary, made the orders more sanitary compared to an open buffet of meat. The active waiters frequently stopped by our tables to turn the meat and asked if we needed anything else; in my opinion, it was an A+ for service. My only issue was the lengthy amount of time it took for the soup to be prepared. By the time half of the meat was finished, they decided to bring out the soup.

I felt stuffed and extremely content with the food; I would come back again with friends. Other customers were also heartily eating with meat orders doubling our own. To any students who like to eat, a group will be satisfied eating here. The pricier dishes were understandable as the restaurant was clean and the meat were of high quality.