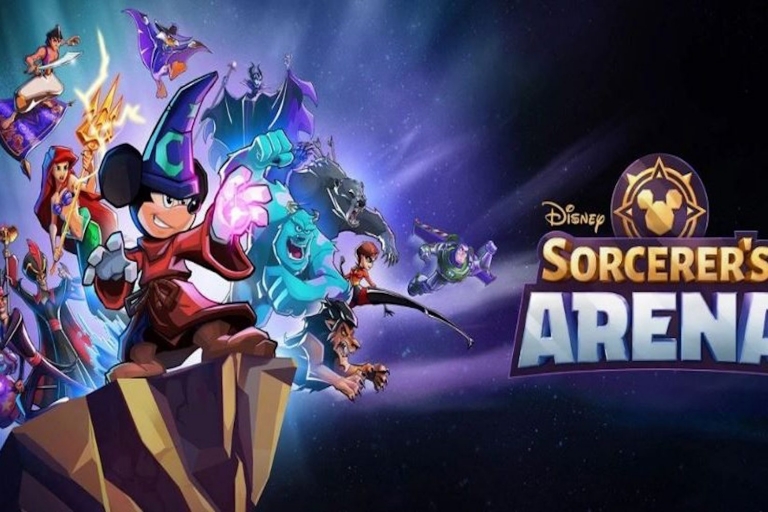 The 'Sorcerer’s Arena' app is an interesting combination of Disney characters and combat. This game features many fascinating and entertaining things and it’s definitely a favorite of mine.
Rating: A Photo Courtesy: Glu Mobile

From my childhood, I’ve always enjoyed Disney and all the magical experiences that come with it. So, when I saw this app trending in my App Store as the top strategy app, I knew that I had to see what this game was about. It was a little strange that features such as battling and combat would be mixed in with Disney, but this drew me in even more to see how this would come together in the end.

Giving off a hint in the title of the app, the main objective is to become the master sorcerer by the end of the game and to do that, the player needs to battle opponents in order to level up and gain more powers and special characters.

When you first begin, you are given two characters to start off with. For the first few levels, you are assigned the characters that you are able to play with until you level up and gain the more high-end characters. There are a total of 66 characters and you can earn each one by collecting a certain amount of gems.

I’ve only recently started the game, so I have not made it through many levels and there are probably many more features in the upcoming levels. But in the levels I’ve played, I discovered that I was only able to have a maximum of five players on my team which consists of villains and heroes. Each character comes with basic powers, for example, Mickey Mouse has the ‘Shooting Star’ power that can hit one of the opponents on the opposite side. There are also ‘Taunting’ features where each character can hit all opponents instead of just one, but those are limited based on the amount of power you gain.

In order to win the battles, the player needs to eliminate all opponents. After eliminating the weaker opponents, the main villain is brought out and is the hardest to beat. If the player ends up losing all of their characters, they do not earn any power which decreases the chance for them to level up.

I personally liked the way the battles are set up to have five players so that you have more of a chance to win. I enjoyed that my opponents were Disney characters to bring back those childhood memories. As players advance in levels, the opponents start to become more challenging. Leveling up your players and equipping them with the maximum strength is crucial in defeating opponents.

In my opinion, the best feature is ‘Auto Play’ which is where the game chooses the strategies to battle with on its own. This comes in handy when you aren’t able to play your moves or if you’re just lazy.

There are also challenges and events you can participate in such as ‘Limited Time’ events, ‘Summoner’ challenges and ‘Club Conquests.’ You are also able to complete ‘Daily Quests’ to earn special rewards as well as choose multiple battles that you want to play in.

The settings feature is definitely a bonus in this game and is personally another one of my favorite features. For example, if I were playing against villains from Mulan, that battle takes place in a particular scene from that movie.

While I enjoyed the game, one downside is how it it’s very simple and straight forward. For example, when you are battling, you simply just need to click the button with the power and continue doing that for all of your characters on your team. While some people may enjoy the simplicity of this game, I would rather it be more challenging and have more user interaction.

I can’t wait to continue discovering what else this app holds. Disney’s Sorcerer’s Arena allows anyone to have a grand time and it definitely will be a game that I will continue to play but maybe not for long amounts of time since it tends to become repetitive. Disney lovers should definitely try out this game to see how much fun it can actually be.