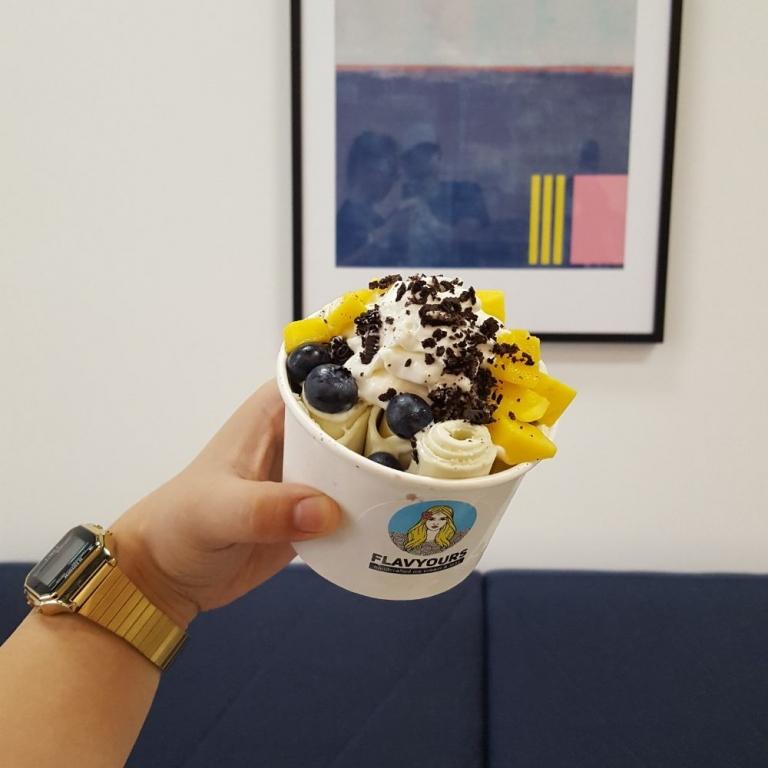 Although Flavyours appears a bit plain at first, the shop spreads positivity with posters that say, "Basic is boring, customize your happiness" and a label on the front door that reads, "Happiness lives here."
Ranking: A
Photo Credit: Flavyours

Two months ago, one of my friends told me about a new rolled ice cream place called Flavyours. Unfortunately, the shop owners had to postpone their grand opening and I never had a chance to try it out. After waiting for several weeks, Flavyours has finally opened and I checked out some of their desserts and beverages.

At first glance, I could tell that the shop was still developing. The seating arrangements were minimal, the walls were blandly white and overall and it looked like more work could be done to spice up the place. There were also only two workers while I was there, which made the shop both look and feel empty.

While the decor seemed to still be in progress, the menu offered many options. It ranges from typical ice cream flavors such as chocolate to more “exotic” ones like pandan and pina colada. Fresh fruits are offered as toppings and mix-ins, and drizzles come in tangy and sweet flavors.

Each order of rolled ice cream took about six minutes to prepare. The employee who made my order was very precise with every roll, making sure each one was evenly rolled out and about the same size.

I ordered “Don’t Thai Me Down” ($6.00), which had a Thai tea base, topped with fresh lychee, greengrass jelly and condensed milk drizzle. My server was nice enough to put the two extra rolls in a separate cup instead of trashing them or trying to stack the excess on top. The presentation of my order was also very neat.

I felt a creamy consistency as I dug my spoon into the ice cream, and it melted nicely in my mouth. The flavor was balanced between the tea’s strength and sweetness, making it reminiscent of the Thai tea I tried in Thailand a few years ago. Although the lychee and Thai tea combination tasted a bit odd at first, the drizzle and toppings complimented the ice cream nicely.

Next, I tried some of my mom’s order of “Cookies N Cream” ($6.00). Oreos are put into a blender with Flavyours’ classic base, which was different from what I’ve seen at Rolled Ice Cream since the latter chops up the mix-ins instead. It was later topped with crushed Oreos, chocolate drizzle and whipped cream.

Coming from someone who isn’t the biggest fan of chocolate, I thought the chocolate drizzle made the ice cream too sweet. It tasted like layers of chocolate, so I recommend it to people who have a sweet tooth. Despite the sweetness, I enjoyed the ice cream.

Finally, I shared the “Thai Milk Green Tea” ($4.00) with my friend. It’s very soothing and not watered down. It had a strong aroma of green tea with a light and creamy taste of half and half. It’s something that should be enjoyed slowly.

Flavyours currently feels empty and quiet, so patrons may want to walk in then head back out. But the welcoming staff and tasty desserts make up for the vacant feeling, so I recommend it to anyone who would like to stop by for a quick treat.