‘Gelatology’: A succulent synthesis of science and sweets 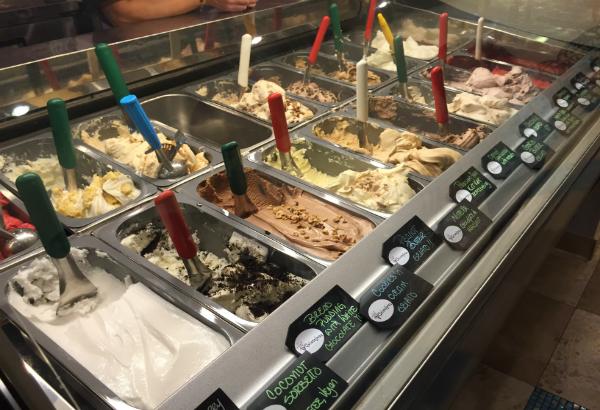 “Gelatology” is a host for innovative gelato flavors, such as Cookie Butter, Bread Pudding with White Chocolate and Pear with Gorgonzola Cheese.

While many people prefer to take a dip in the pool to cool down in the Vegas valley heat, others would much rather dive into a realm of frozen desserts—which is made possible by culinary figures such as Desyreé Alberganti. Originally a pastry chef at Valentino restaurant inside The Venetian, she gained popularity as a gelato hotshot after kickstarting Art of Flavors, a dessert shop that called Downtown Las Vegas its home. However, she departed from and shut down the store earlier this year, only to get back on track and unveil her newest project: “Gelatology.”

The overall atmosphere of the establishment is both welcoming and friendly. The walls boast vibrant splashes of cherry red and ocean blue, and the earthy tile floors sit underneath ice cream parlor seating arrangements. Upon entering, there is a glass display case on the left that sports a quaint collection of Italian cookies sold by the pound ($16), and further down, the paramount: the gelato case.

However, “Gelatology” sells more than just sweets and gelato. The menu is uniquely fitted with chemical equations for their “Coppe” selections, which is a combination of gelato, flavorings and toppings. One of their most popular options is the Fat Elvis ($8.50), which consists of Peanut Butter Gelato, strawberry pureé, banana compote, bacon candy, peanut croccantino (crunch nougat) and panna (cream). They also have shakes made from gelato, with flavors such as Salted Caramel, Espresso and Peanut Butter ($6.50).

As soon as my guest and I walked in, the employees (including Alberganti herself) immediately offered samples of their most popular gelato flavors, which were, at the time, Nutella and Oatmeal Cranberry with Pecans. Deciding which flavor to succumb to was the most difficult part of our visit, but eventually my guest and I settled on Quattro (small) sizes of Lemon Sorbetto and Passion Fruit Kit Kat Gelato ($4 each), as well as a Millefoglie with Dulce de Leche ($4.50).

Gelatology by Nikki Molina on Exposure
The Lemon Sorbetto was awfully tangy, but Alberganti did give us a fair warning. The lemon zest was overconfident in this icy concoction, and had it not been too sour, I would have enjoyed more than just a taste.

On the other hand, the Passion Fruit Kit Kat mastered its subtlety. I originally believed that the superior fruit and chocolate duo was fresh strawberries and dark chocolate, but this gelato flavor proved otherwise. An unexpected pairing, the passion fruit was delightfully refreshing and the creamy undertones of the white chocolate kit kat smoothed out the peaks of passion fruit, creating a well-balanced flavor.

The Millefoglie (which is nearly impossible to pronounce) was a bit too sweet due to the dulce de leche smeared between its layers of puff pastry. The powdered sugar topping and flaky puff pastry made it hard to eat without leaving a few crumbs on the floor, but that is simply the personality of all Millefoglie. I am not an avid fan of the “thousand layers,” but I did appreciate the unusual dulce de leche twist—a substitute for the typical airy custard.

At “Gelatology,” the prices can be intimidating even for the smallest size of gelato, but the dollars are well worth it. Featuring desserts made with fresh ingredients and some traditional Italian flair, Desyreé Alberganti’s “Gelatology” is a must for all sweet treat fanatics, and I will surely return when another craving strikes.