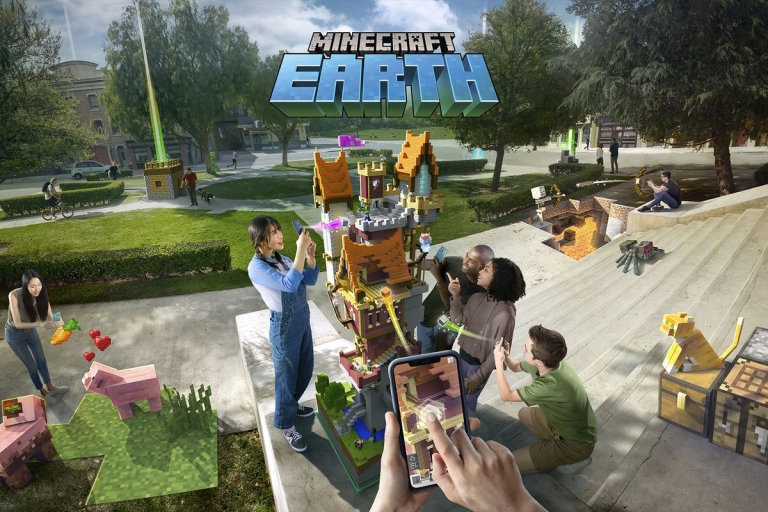 ‘Minecraft Earth’ is an augmented reality game, where you can play along with yourself or with friends to collect, build and adventure the infamous Minecraft realm.
Rating: C+ Photo Courtesy of Apple Store

Reminiscing about my childhood, my favorite game pops into my head. Going onto the App Store, I begin to type in Minecraft in the search bar. The first thing that catches my eye at the very top of the screen is an ad for another Mojang game called Minecraft Earth. Intrigued, I download this version, ignoring the original just to see how they could possibly expand a game as simple as Minecraft.

First opening the game, the classic Minecraft soundtrack begins to play and it starts you off on a tutorial right away. However, even with the tutorial, it was still confusing where to begin. Eventually, I figured out that to gather materials, you don’t have to physically walk towards it, you just tap on the item to collect it. After gathering enough materials, you are tasked to build a simple house. The phone must be on a flat surface to build, as it uses the actual phone camera to build, however, with distractions in the background it was ultimately too hard to know where or what to click on the screen.

With this version, you are still able to play with your friends. However, Minecraft Earth takes this to the next level, where you can collaborate with others to test out your builds before putting them to the test in mini adventures the game provides. But when I tried to play with two other friends, we felt like there wasn’t enough space to move around freely and the actual app on our phones didn’t correlate when trying to build together, but that is understandable as it is still in its developing stages.

Ultimately, it is going to be hard to navigate around the world when playing with an augmented reality game, as it takes more focus and correlation. But, Minecraft Earth does offer a lot more than any other AR games, like Harry Potter: Wizards Unite or Pokemon GO. For example, Minecraft Earth doesn’t make the user focus on collecting certain items, so you can go explore for whatever you want or need and aren’t limited.

Being such a classic game to begin with, Mojang releasing Minecraft Earth preserves the authenticity everyone knows the original game for. Despite it taking a little to get used to playing and learning the controls, Minecraft Earth perfectly highlights its features in an augmented reality version.