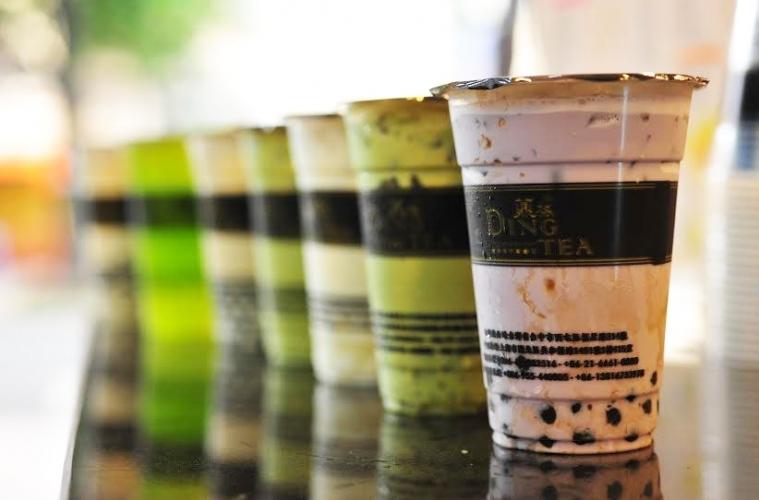 Considering the area it’s in, Ding Tea usually only has a few to no customers in the shop, so waiting in line isn’t a problem. The quick service makes it easy for a quick walk in as well.
Rating: APhoto Credit: Ding Tea USA

Chinatown has recently added a new hangout-friendly boba shop called Ding Tea, a franchise spread throughout Asia and America. After hearing about it from my friend, I decided to try it out with my family and boyfriend.

The first thing my mom told me when we entered the shop was, “It’s so cute,” and I agreed. It isn’t the tooth-rotting type of cute with a lot of pink, but instead it has a trendy café aesthetic of black tabletops, metal buckets to hold fake plants and wooden benches against the wall.

I ordered a large signature milk tea with golden boba and egg pudding ($4.90). The boba was chewy and had its own unique flavor separate to the drink itself, but the sweetness in the pearls added to the drink’s already sweet base. Although the sweetness didn’t bother me, other patrons may want to adjust it, which the employees will gladly do by adding more tea or sweetener.

After skimming over the topping options on the menu, my cousin decided to order a large matcha milk tea with cream cheese ($4.90). The cream cheese was frothed at the top of the drink and he had to shake his cup to fuse the flavors properly.

This drink had a unique flavor–one that I’ve never tasted before. While I expected a powdery base with chunks of Philadelphia cream cheese, it was actually more comparable to the taste of sea salt and caramel. It sounded like an odd mix at first, but it was worth the try.

My boyfriend ordered a medium passionfruit milk tea with egg pudding ($3.80). The flavor of the passion fruit was distinct, so it tasted more like a tropical iced tea and less of a milk tea. The egg pudding was silky and complimented the drink nicely. Adding boba as a topping instead of the pudding would have been a better choice, though.

My dad’s order was the most complicated one out of everyone else’s. After a long day at work, he wanted a warm drink to help him relax. He asked if his ginger milk tea could be heated instead of iced and he also wanted to add golden boba. Although the order was unusual, the worker was able to answer all of his questions easily.

The medium hot ginger milk tea with golden boba ($3.70) was the best drink I’ve tried so far at Ding Tea. I usually don’t like ginger, so I was reluctant to try the tea. Upon tasting it, I was surprised to say that the ginger didn’t bother me and the warm boba actually tasted better than when it was cold. I recommend this drink to anyone who is craving boba but would also like to drink something warm.

Along with Ding Tea’s quality drinks, the establishment also serves comfort through the ambiance of the shop. The employees are knowledgeable of what’s on the menu, make the drinks fast and are open to adjusting a customer’s order to their liking. I encourage boba lovers and people who are yet to try boba to try Ding Tea whenever they get the chance.