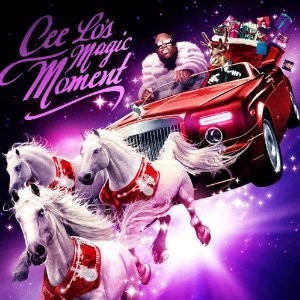 After listening to Cee-Lo Green’s newest album, Magic Moment, I have decided that it will be the only Christmas album I will be listening to this holiday season. Cee-Lo manages to give these old fashioned holiday songs a new twist, fusing them with hip-hop and a joyous energy which is unlike the songs previously righteous and overly familiar piano tunes. Even his not so happy renditions like “Mary Did you Know?” or “Please Come Home for Christmas,” where he talks about how his sweetheart not making it home for Christmas, contain a hip-hop feel that vastly improves upon the original version of the song. This album contains the cliche holiday songs that have been interpreted for the umpteenth time such as “Silent Night,” “All I Want for Christmas,” and “Run Rudolph Run,” as well as some songs that I would not expect to be included in this collection as, “You’re a Mean One Mr. Grinch.” Cee-Lo manages to alter songs in a manner that makes them enjoyable to those who would otherwise loathe them, such as myself. All in all, this album is completely surprising as a Christmas album, but completely expected from a musical genius such as Cee-Lo Green.
Click here to listen to Cee Le Green’s – “All I Need is Love” feat. The Muppets