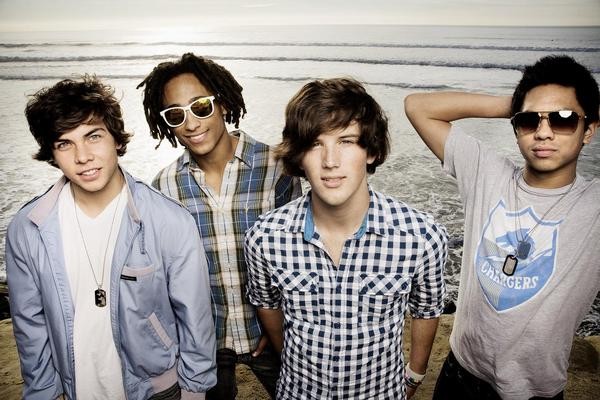 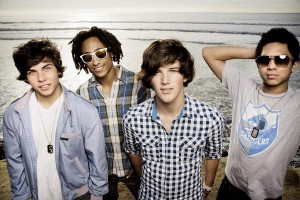 With songs such as “Dance Forever” and “A Different Side of Me,” AllStar Weekend’s fame continues to grow, pleasing fans everywhere they go. As they perform, girls scream their names with a frenzied look on their faces. These new Disney artists present themselves to their best ability, both on and off stage. In 2009, they were signed to Hollywood Records and immediately began to work on their first album. Lead singer Zachary Porter, lead guitarist Nathan Darmody, bassist Cameron Quiseng, and drummer Michael Martinez make up Allstar Weekend.

Southwest Shadow: To start if off, how’d you guys meet and become a band?

ZP: We all grew up together in San Diego, California. Cameron, Nathan, and I went to high school and middle school together, so we’ve known each other for like 8 years.

CQ: Yeah, we started biking and paint-balling together way before we were musicians.

ZP: And Michael went to a school down the road. Nathan and I were in a bunch of bands together in high school. We played pool parties and just kind of played in our garage.

Southwest Shadow: How’d you come up with your band name, Allstar Weekend?

ZP: We really liked that song. We really liked Shrek, and so there’s a lot of good songs on the Shrek soundtrack, and we were first trying to learn how to record ourselves. We referenced one of the mixers in the production on the Shrek soundtrack—sounds like a weird thing to reference, but there were so many good producers on it. So, we named ourselves Allstar. We were called Allstars for a while, but obviously, Converse Allstars and there’s a bunch of…We couldn’t legally clear the name.

ZP: So, we added Weekend cause…

CQ: Weekends are fun. When we came up with Allstars, our managers told us, “Alright, you guys have 24 hours to come up with a band name. Go.”

ND: Before “AllStar Weekend”, it was “Outerspace Politicians” and our managers told us to change it.

CQ: Yeah, exactly, exactly. It was cool at the time though.

Southwest Shadow: How does it feel writing simple songs and then ending up being legitimate and having a record?

ZP: It’s really…kinda weird and exciting. I don’t know. We never really expected anything. We were just doing it cause we loved it and it was awesome. We just wanted to do it really bad and everything just kinda worked out.

CQ: What’s crazy for us though, is that a lot of the songs that were recorded and written in Nathan’s bedroom ended up on the album. Like, all those demos actually turned into songs that you can get in a store now which is so weird to us. You go into a store; you buy albums. That’s how you get your music or iTunes, honestly, but to go in there and to see your own album is…really weird.

Southwest Shadow: What’s your favorite song on your album, Suddenly Yours?

ZP: I like them all cause, I wrote them. (laughs) But I really like, “Come Down With Love” and I like a song called, “Here With You.” It’s a cool song.

CQ: Yeah, I like “Here With You,” “Dance Forever,” “Come Down With Love.” Pretty much everything on the album. It’s fun.

CQ: Yeah, that’s not just our songs. It’s like all songs in general about girls he likes.

Southwest Shadow: For your song, “Come Down With Love,” you guys talk about love being confusing and refer to it as a disease. How do you feel about relationships at this time in your career?

CQ: Aw, man! Everyone seems to…

ZP: Well, for me, I’ve been so busy with this band I haven’t had a relationship since high school. Haha.

ND: Well, being in a band is kinda like having three girlfriends. We have to make each other happy 24/7. We’re always with each other, so it’s kinda like you know, having another girlfriend.

CQ: If he takes my Reese’s, we have a problem. Yeah, relationships, I mean…

ND: Cameron’s the king of that, right?

CQ: Yeah. Before this band I was socially awkward so I couldn’t really talk to girls. I didn’t really have any relationships in high school or middle school. My awkward stage was like 3rd grade to 12th grade, but since this I’ve gotten more confident, and I really want to be in a relationship but like Nathan said, it’s really hard because of our schedule. We don’t really have time to. But I mean we could still text and iChat and stuff so that’s pretty much the best we got.

Southwest Shadow: You guys were on the show, Sonny With A Chance. How was that?

CQ: Disney Channel’s awesome. But being on the show was not what you’d think it would be. We had to get there like 10 in the morning and we had to wait around for nine hours before we shot a two-minute segment. The set’s really cool, but it’s weird because when you see it on TV, you think it’s filmed in a normal building or like a school, but they just have these little squares cut out with lights everywhere and it’s just all set up. It was really cool, though. The cast was really nice.

Southwest Shadow: Have you guys had one moment, where you felt like you really found success or is there any one thing?

ZP: Yeah, definitely. I could remember when we played in the House of Blues in Anaheim—that was pretty crazy. We’ve haven’t been on a big tour with another band, but we’ve opened for Justin Bieber once. We’ve opened for Selena Gomez a couple times, which was amazing to play in front of thousands of all those fans. But, it’s another thing to play a show for your fans. We played the House of Blues in Anaheim, and it was this great show. It was this weird moment and it really hit me— “Wow, I might be doing something right”—cause you know, it’s like, doing this with your life is a weird thing. My parents didn’t want me to be in a band. They’re really proud of me now, but they definitely wanted me to do something else. And so you have a lot of these long reservations and a lot of like, “Am I doing the right thing?” But you know when there’s a moment like that, just a great show, and it’s your own fans that you made, it’s just the best.

CQ: When people have you sign like inhalers and insulin pumps, that’s when you know you’ve made it, okay?

Southwest Shadow: Outside of being a band and performing, how do you guys spend your free time?

ZP: We really don’t have a lot of free time though. I’ve been to my house in San Diego, maybe four days at the most, out of 365 days.

CQ: I’ve been home less than 30 days and I go home way more than you do.

ZP: Yeah. So, we work seven days a week and we’re…

CQ: But, it’s not really work though. It’s like fun.

ZP: When you do what you love, it doesn’t really feel like work, but at the same time, we’re so driven. We have such a great opportunity, getting to be signed and this is really the moment for us to capitalize on being a band. I don’t really want to not be working. If there’s an hour of my day where I’m not doing something, I feel guilty and I have to go write a song or talk to someone online or something.

CQ: Yeah, the thing is, with our job, we get to see people that enjoy our company everyday. It’s really cool when we get to meet a bunch of people. We get to travel a lot. It’s been one of my dreams my entire life to travel. Before this band, I’ve been to California and Hawaii because I have family in Hawaii, and now we’ve been to almost every state. We’ve been to Canada; we’ve been to London twice, hopefully going back soon. So, it’s crazy. It’s a great job.