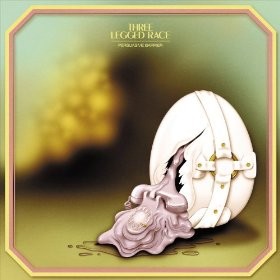 “Persuasive Barrier” is the debut album of Robert Beatty’s Three Legged Race. Robert Beatty is a Kentucky based media artist who founded Hair Police and has released several other audio projects, such as “The Wrong Element 12”. Beginning with the track “Traces of a Wet Crowd,” the album begins to present an ambient, distant environment through unfamiliar sounds and dialogue. The feeling of alienation continues and intensifies in “Permethrin” as more indistinguishable sounds mash together; only to calm down to a low lull in “Persuasive Barrier.” The album continues to rock back and forth between calm and forceful in the next three tracks, “Magnetic Bride,” “Butter Colored Hallway,” and “Locked Eyes.” The album finally winds down to sounds that almost seem robotic, like workers constructing artifacts in a Sci-Fi workshop. At best, the album is an enjoyable feeling of ambience and discovery. At worst, it’s a collection of unrecognizable sounds that seem to simulate robots and metalworkers. The album has plenty of redeeming qualities and only a few sections are not at least somewhat enjoyable.