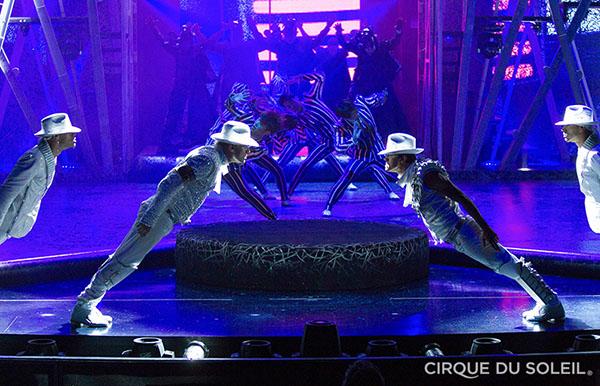 The talented cast displays Michael Jackson's most well known moves and gestures throughout the show, as is seen during the act for 'Smooth Criminal.'
Grade: A
Photo Courtesy of Cirque de Soleil

A touching tribute to the childlike world of Michael Jackson, One by Cirque du Soleil is a stunning display of magic, mystery, and music. The beauty of this production is that anyone can enjoy it, MJ fan or not. You don’t have to know the songs to be swept up by the music in this invigorating, soulful production.

Cirque du Soleil (Circus of the Sun)  started as a group colorful characters roaming the streets, striding on stilts, juggling, dancing, breathing fire, and playing music. What started out as a band of 20 street performers in 1984 has become one of the most world renowned dance companies, with performing artists from close to 50 different countries who provide the highest quality of artistic entertainment.

One follows four “audience members” as they set on a journey to capture each of the pieces of Michael Jackson memorabilia. MJ’s socks, shoes, sunglasses, and most importantly, his glove, are the prime targets for the four characters. Each individual object grants them the power of dance and confidence that they are after.

The choreography is beautiful and eye catching, as is to be expected by the talented cast of all Cirque du Soleil shows. The dancers went from flying viciously through the air on trampolines to “Thriller,” to twisting and turning in mid-air to land lightly on the floor, and immediately floating across the stage in smooth footwork to the mellow music of “Leave Me Alone.” The dancing seems effortless, and the one or two mistakes that my critical eye caught were covered up smoothly, only proving that these dancers are still undeniably human, despite being, in my opinion, the best of the best.

The stage is set up so elaborately that wherever you look, there was some form of action occurring. Most times this is beneficial, but in some songs I found it to have more of a negative effect. For example, during “They Don’t Care About Us,” the back wall displayed videos of people in need, and although it is only meant to add to the overall effect of the song, I believe that it took away from the focus on the dancers. My guests and I agreed that we were more focused on the videos than on the dancers and the choreography.

The show’s visual effects are absolutely impressive, and range anywhere from the elements, to stars, to people. This show appealed to all of my senses, as the setting and sound managed to overtake the audience. Towards the very end, the most beautiful piece visual effect was put into action during “Man in the Mirror,” as the cast and their gadgets manage to make Michael Jackson himself appear in his magical land of Neverland. The act is the most touching of them all, and the soulful and sensual merging of music, dance, and visual effects create a most stunning display.

Having seen nearly every Cirque du Soleil show available to the public, it is safe to say that I am accustomed to the individuality that the cast and crew bring to the classical music that they dance to. Nevertheless, my past experience did not prepare me for One. The show appeals to the inner child in all of us, to the mystery, to the magic, to the music.