The one, the only, ‘The Noodle Man’ Prepare for freshly cooked noodles in a busy environment 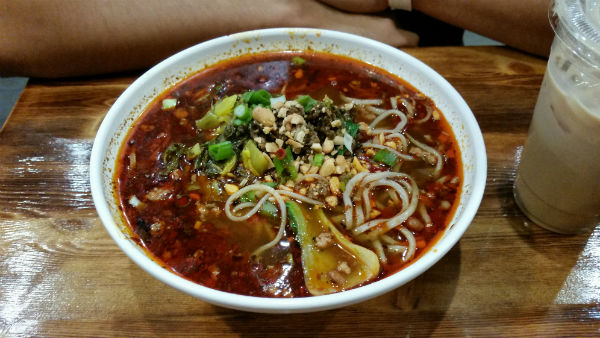 For $8, the Hot and Spicy Noodles lived up to their name nicely; the flavored red broth marinated the noodles and vegetables intensely. Photo Credit: Althea Gevero

Approximately a six minute drive from school, “The Noodle Man” is a humble establishment situated across from The Arroyo Market Square. Since glancing at the exterior does not give much of a hint to what could be awaiting, my guest and I decided to take a chance with the restaurant—a choice that we did not regret at all.

Upon entering the restaurant you will be greeted with a much different scene from its calm exterior. On my various trips to “The Noodle Man” I noticed it was usually bustling with patrons who, due to the small amount of space, are often seated right next to each other. Despite the slight chaos, my guest and I waited for a minute or two until a waitress seated us.

Passing in between tables flanked by booths and chairs, I noted the stylish wood accents and Asian art covering the walls. The restaurant did manage to keep a modern feel with a popular radio station quietly humming in the background and bright television screens. Immediately I noticed the kitchen area in the back, where patrons can watch and smell the authentic food being made up close.

When seated, my guest and I were lucky enough to have a front row view of their noodle making process; a cook was seen shaping heaps of dough, stretching and rolling it multiple ways, then smacking it back down onto the counter. After reading through the straightforward menu, a waitress took our order in a brief but polite manner. Watching the cooks do their work was entertaining enough to keep my guest and I occupied during our 10 minute wait for food.

My guest received his order of the Hot and Spicy Noodle ($8) a few minutes before I received my meal. The portion was larger than I had anticipated and my mouth was watering just from its looks; the dish had heaps of vegetables, peanuts and pork over fresh noodles in a spicy red broth. I managed to take a few bites of everything before the spiciness was overwhelming for me, but the tastes left me wanting more. The broth was swimming with a number of different spices, which allowed the vegetables and pork to be marinated with an intense flavor. My guest concluded that for those who enjoy spice, the juicy meat and chewy noodles are sure to make this dish a win.

My order of the String Beans with Braised Pork Chow Mein ($8) arrived next. As the title suggests, I was presented with another large bowl filled with string beans, onions, peppers and braised pork over chow mein. The meat was extremely tender and lightly covered in a mixture of tangy soy sauces. Seeking relief from the meat’s strong taste, I tried the noodles—whose flavoring was slightly bland, but remained appetizing. I found that the earthiness of the rest of the meal’s ingredients balanced out the tanginess of the pork.

While the establishment is smaller in size and often packed, the dedicated crowds are a sign of quality food. Browsing through the menu’s extremely modest prices had me in awe once I tasted my first dish. I will definitely be taking my business back to “The Noodle Man” for the savory food, and not to mention the satisfaction of witnessing it being prepared right before your eyes.