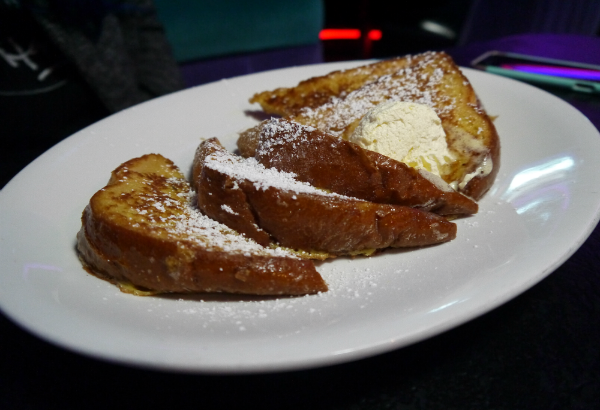 The French Toast, $8.95, was sweet and simple for a generous serving.

French Toast
The French Toast, $8.95, was sweet and simple for a generous serving. 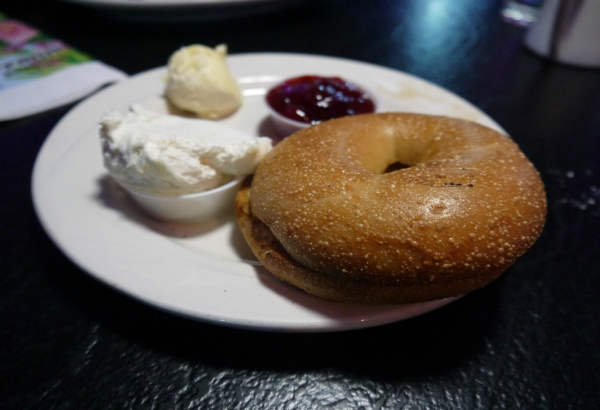 Bagel with Cream Cheese
A basic side to serve with the omelet, the bagel with cream cheese and jam was a nice treat. 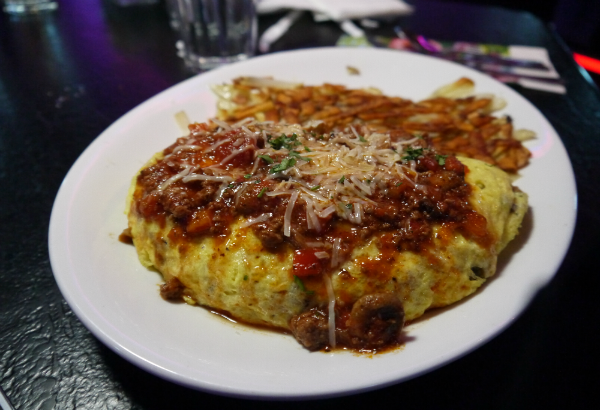 Maserati Omelet
Loaded with sausage, mushrooms and cheese, this dish ($12.95) was definitely worth the price. 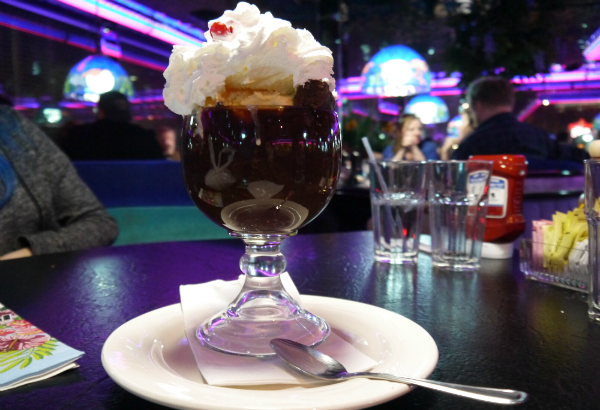 Driving a little ways into the Strip and taking a slight detour will take you to The Peppermill Restaurant, a charming roadside eatery that may not look too impressive from its surroundings. Delving deeper into the restaurant, however, proves that there is much more to it than what meets the eye.

My guest and I happened to be lucky and entered the establishment on a slow day, and were seated immediately by a polite waitress in a white blouse, skater skirt and shiny nylons. Her attire somehow matched the loud and eccentric restaurant decor. The theme of The Peppermill is blue hues and neon accents, with hints of stained glass and a fake tree here or there.

The Peppermill Restaurant by Althea G on Exposure

Despite the obscurity of the environment, I was excited to sit in the velvet covered booths which were as comfy as they looked. On a busier day, the establishment sees itself bursting with patrons, and the wait for food or a booth can take up to an hour. A waiter was quick to offer us drinks, and soon enough, we were ready to order from the menu, whose prices vary from $8.95 to $29.95.

My guest ordered the French Toast ($8.95), which included cinnamon and vanilla over a generous number of thick Texas toast slices. The serving size was larger than we expected, and seemed to be worth the price. When I took a bite of the softened toast dripping with the sweet cinnamon and vanilla, I was pleased; the sweetness was not overpowering to the point of sickening, and the toast was not bland at all. The one downside, however, was that the toast was overcooked and burnt tasting.

As for myself, I ordered the Maserati Omelet ($12.95) which was a huge serving of eggs stuffed with sausage, mushrooms and cheese, topped with Italian meat sauce and more cheese. The price had me skeptical, but once my order was brought out I had no regrets about my choice. The omelet was hefty and took up a large portion of my large plate, which also came with hash browns on the side. The serving was definitely made for more than one person, and I found myself unable to finish even though the omelet was delicious. The sausage and mushroom combination was not overwhelming, and instead worked to make the omelet have a hearty taste. The meat sauce on top further added to the taste of the dish, adding a savory flavoring that balanced out the cheesiness.

My only qualm with the dish was the hash browns; they were a fitting side, but tasted bland and served as only a tasteless break between bites of the omelet. On a separate plate, the omelet also came with a bagel and cream cheese, which was simple and tasty.

Lastly, for dessert, we ordered the Elegant Brownie for $8.95. My guest and I were met with a huge glass filled with brownie and fudge, covered with ice cream and overflowing with whipped cream. The ice cream was sweet and soft: a perfect contrast to the warmth of the chewy chocolate. Even with the two of us, we were unable to finish the colossal serving.

All of our orders were finished around 10 minutes after we ordered them, much faster than I expected. However, when The Peppermill is more crowded, food orders can take up to an hour. Despite the slightly tacky environment, there is a certain fond quality that this restaurant possesses, one where it would be the seemingly perfect place to eat at on a midnight food run. The prices may be upwards of $20 at times, but portions are so huge that splitting the meal with a friend would be ideal. At the end of the day the Peppermill has certainly gained my favor, and I will likely be going back with a group of friends to tackle the delicious menu items they have to offer.