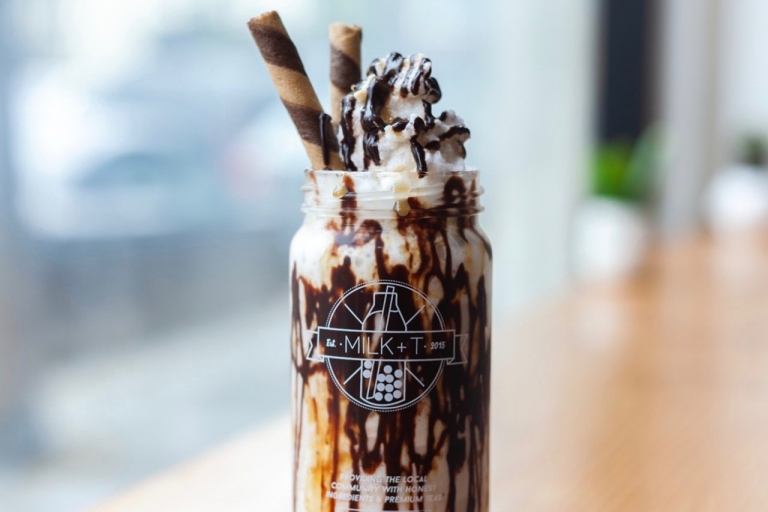 Bringing LA culture to Vegas, Milk + T is the first self-serve boba bar Las Vegas has seen. Located randomly by a gas station, their unique way of selling boba makes them stand out from others.
Rating: B- Photo Courtesy of Postmates

Affordable boba places are in demand, but they’re difficult to find here in the desert. Well, what about a self-serve boba bar? Sounds like a myth, a place where one gets to put as much or as little boba and other toppings in their choice of drink. Guess what, this magical place actually does exist, and it has a spot right here in Vegas.

Milk + T currently has three locations: one in Las Vegas, another in Oregon and its first location in Los Angeles—where it started out as a food truck. All of their drinks are created with natural ingredients rather than artificial flavors. They are also an eco-friendly company, offering glass bottles, which can later be reused while still keeping the plastic cup as an option for their customers.

While waiting for my order on a Wednesday afternoon, the quotes on the walls and the merchandise  caught my eye. One of the quotes exclaims “Run by Women, Fueled by Boba!” with a Drake cutout sitting underneath it. The catchphrase that is on most of their merchandise is #BOBAWASTED.

While trying to pick from the array of base options on the menu, ‘Guilt Trip’ ($6.50), was my final decision–a blended milk-based drink with a chocolate and caramel drizzle. It also came with a scoop of chocolate chip ice cream on top. I chose to add regular boba and condensed milk to my drink from the topping bar. The drink itself had a prominent flavor of chocolate that overpowered the other flavors, like caramel and vanilla. As I enjoyed the beverage I noticed that it became sweeter and towards the end, it required a sweet tooth to finish.

Since my friend came with me, he ordered a drink called ‘Piglet’ ($5.00), which had a coconut milk base blended with Milk + T’s handmade strawberry syrup. For his toppings, he added boba, chia seeds and extra strawberry bits to enhance the flavor.  I took the first sip of his drink, all of the toppings along with the tea rushed up the straw and a variety of textures hit my tongue. From smooth to crunchy and chewy, it was different from what I had, but it was delicious compared to my drink.

Still quite new, while the beverage game is on point, they could use some improvements in the actual experience. For example, other cafes have more options on their menu and an atmosphere created for studying. Personally, I would only go for the option of being able to add ice cream to your drink, however I think they could improve upon the toppings selection and boba itself.