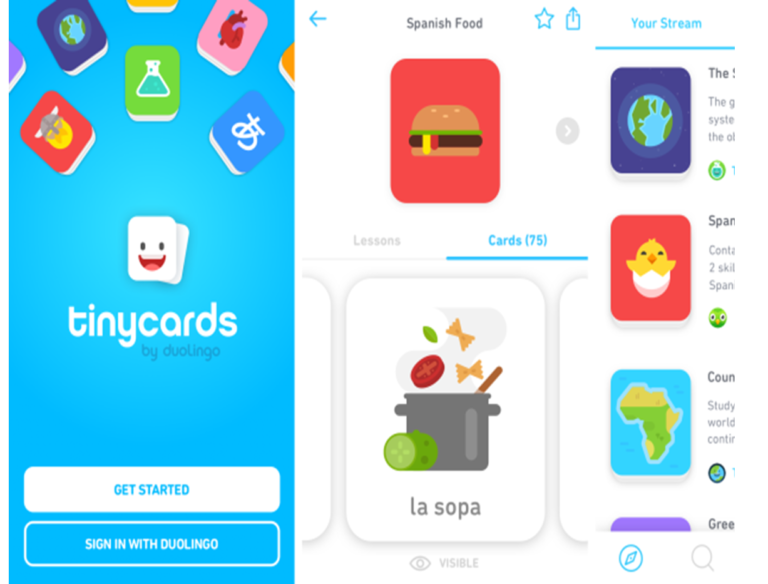 'Tinycards' is a great way to connect with individuals that have common interests with the user, as well as to pass time. The application offers categories ranging from school subjects to popular television shows.
Rating: APhoto Courtesy:'Tinycards'

While using the popular app Duolingo, I stumbled upon another app that was made by the same company: Tinycards, a better version of Quizlet. Not only does this app contain a set of flashcards and quizzes, it also has the option to create a lesson plan to help fully understand a subject.

When the app is first opened, users must make an account or sign in with their Duolingo account. After signing up, you can either make flashcards or follow other users. While searching through the application, I was given suggestions on similar accounts to follow from around the world. The most popular suggestions were flashcards about countries, the digestive system and Minecraft. Unlike other flashcard applications, Tinycards allows the user to search for specific categories of flashcards and quizzes.

Since the app is made by the same company as Duolingo, all of my interests from that app transferred into Tinycards. Since I was learning Spanish and French in Duolingo, those were the first suggestions that popped up. As I continued to use the app, I found it to be more helpful than Quizlet, since this app suggested categories that I used in Duolingo.

However, some of the flashcards and quizzes contained incorrect information about their category since users make the quizzes. For example, one of the categories was “Spanish Words” and the photo showed a banana, but the answer was the Spanish word for orange.

Regardless, I enjoyed the fact that it catered to a variety of different interests and allowed small communities to come together–whether it’s for school or pop culture. Even the quizzes about television shows, there were many subjects that pertained to core classes that would help elementary schoolers and college students alike. Since there is no age restriction, I would encourage anybody who needs assistance in school or anybody who has time to spare to give this app a try.