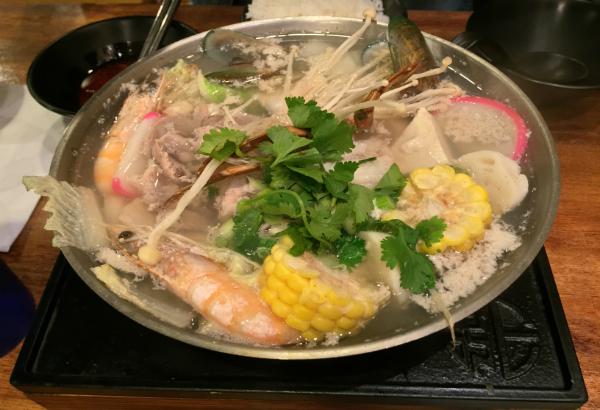 The Seafood & Tofu Pot ($12.99) offered a variety of fresh seafood, proving itself to be well worth the price. 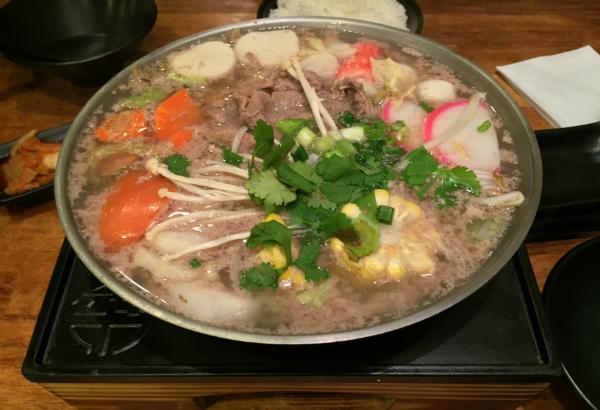 Rib Eye Beef Pot
Garnished with green onions and cilantro, the Rib Eye Beef Pot ($12.99) featured a little bit of everything, from vegetables to seafood to meat. 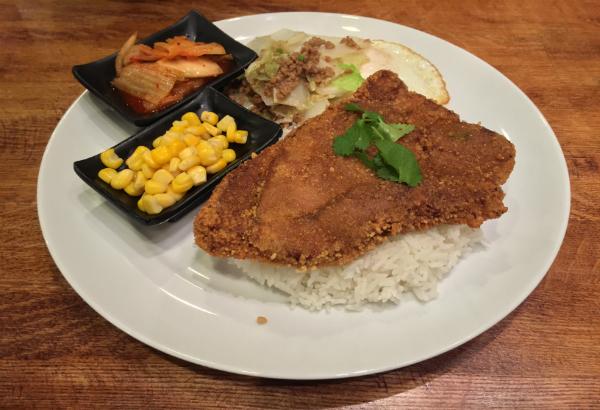 Situated in a plaza right off Rainbow Boulevard, Pot Tea Social House is one of the newer restaurants in the southwest region of Las Vegas. Using original recipes from Taiwan, they aim to create dishes (or pots, rather) that capture the authentic spice of Southeast Asia.

Upon arrival, my guests and I were greeted by a cozy, yet contemporary ambience that was a delightful contrast to the Las Vegas desert. Neutral-colored walls of soft yellows and pewter grays were adorned with simplistic, nature-inspired art pieces, and wooden table arrangements stood on a sleek concrete floor. After stepping into the relatively empty establishment, the waitress promptly picked up on our presence and allowed us to sit wherever we desired.

Simply put, it took us longer to decide what we were having than it did to receive our orders. Five minutes into our conversations, the hot pots, resting on their portable gas stoves to ensure that the soup was heated for the extent of the visit, arrived at our table. Since the hot pots had a serving size of about one to two people, my guests and I approached the food ‘family style.’ The dishes were offered with a spice level from one (non-spicy) to ten (very spicy), but since my guests and I tend to stray away from the heat, we opted for a one.

Pot Tea Social House by Nikki Molina on Exposure
Served in a stainless steel bowl about the size of a personal pan pizza, the Rib Eye Beef Pot arrived at our table, boiling and bubbling. For $12.99, the serving size appeared to be on the small side at first, but considering the variety of vegetables, menagerie of meat and selection of seafood, it duly outdid those thirteen dollars. Corn, tomatoes, carrots, daikon and bean sprouts floated in a clear broth. After taking my first sip, the hot and hearty broth flooded my taste buds with soothing warmth. I could barely taste the slight tinge of beef in the broth, but I appreciated its light, minute flavor as I did not get full too quickly. This entree came with our choice of a side dish, and we settled for a bowl of vermicelli noodles, which added substance to the meal.

Shortly after the first pot, the Seafood and Tofu Pot ($12.99) arrived. Overall, its flavor was quite similar to the previous pot, but instead, was filled to the brim with seafood, ranging from crab, clams, shrimp, scallops, squid and fish. There were a few blocks of delicate, tender tofu, but were oddly discolored and more brown than the typical gray or off-white. Regardless of its odd appearance, it was a tasteless, but necessary addition for balancing out the vigor of the cooked seafood. Between the chunks of taro and leafs of napa cabbage, the vegetables even had a slight crunch to them. As my guests and I helped ourselves to the soup, the waitress often swung by to refill our pots with broth straight from the boiler.

Brought in last, the Pork Chop Rice Platter ($10.99) consisted of a breaded pork chop sitting on a bed of white rice alongside dishes of kimchi, corn, cabbage, ground pork and an egg cooked over-easy. The pork chop, although fried, was in no way greasy. Doused in chili, the kimchi was both tangy and spicy. The corn kernels, on the other hand, were chunky and hard to bite into. My only other issue with the dish was the saltiness of the pork chop, which often had me heading straight for the white rice after every bite to neutralize the overwhelming flavor.

Taking into consideration the comfortable environment, noteworthy service, phenomenal presentation and indulgent dishes, Pot Tea Social House proves itself to be a holistically exceptional establishment. An ideal venue for family reunions, weekend hangouts or any sort of public gathering, the restaurant is a favorable destination for those looking for a little warmth.