Put your conscience to the test with ‘Contra’ 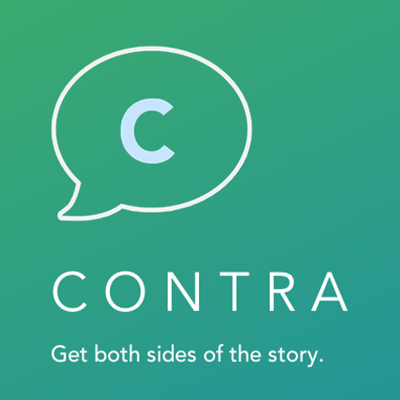 “Contra” is an interconnected web of topics that will spark a debate within seconds. Grade: A Photo Courtesy of Contra

You are in English class, sitting at the front of the room with three other people: your partner and your two opponents, during the annual debate unit. As you nervously deliver your last assertion, the teacher asks the class about the final verdict. Should GMOs (genetically modified organisms) be further advocated in the field of health and manufacturing? Or should GMOs be abolished for their potentially biohazardous and unnatural cycle? Half of the class raises their hand for the first option; approximately the same amount raises for the latter. In the end, it is a 50-50 tie.

Skip the weeks of tedious research and engage in a quick debate with “Contra,” technology’s social opinions platform. “Contra” is not an application created for the sheer enjoyment of Internet arguments often seen on Tumblr and Reddit. Instead, it is a simplistic and educational platform for those willing to voice their opinions and challenge their morals and intellect.

Upon launching the app, the user is directed to a page where he or she will be signed up for an account. Once completed, the user will then be taken to a page with single cells filled with close-ended questions. Questions such as “Were we created by a higher power?” and “Does homework make you smarter?” instantly fill the screen.  Alongside each question are two buttons: ‘Yes,’ and ‘No,’ both of which are accompanied by the number of votes. While the answers to these inquiries are apparent to some, the instinct to respond to all of the cells kicks in quite quickly. Three minutes into launching the application, I found myself rapidly tapping and scrolling, along with questioning my stance on the country’s structure.

At first, the application sounded like an online battle arena ready to be filled with blood, guts and the harsh words of the close-minded. After reading through countless questions and engaging in a debate on the benefits (or downfalls) of social media, I soon learned that the application was not a battle royale, but instead a virtual classroom filled with culture and intellect. A suggestion of mine would be to take this mobile classroom and implement it into a real one, as it has the potential to provide enlightenment on uncovered subjects.

Simplistic and quick, “Contra” has made its way into my heart, pulling me into a kind-hearted spectrum of sharing philosophies. Its endearing design and atmosphere is the ideal tool that those in and out of school need in preparation of 21st century culture.