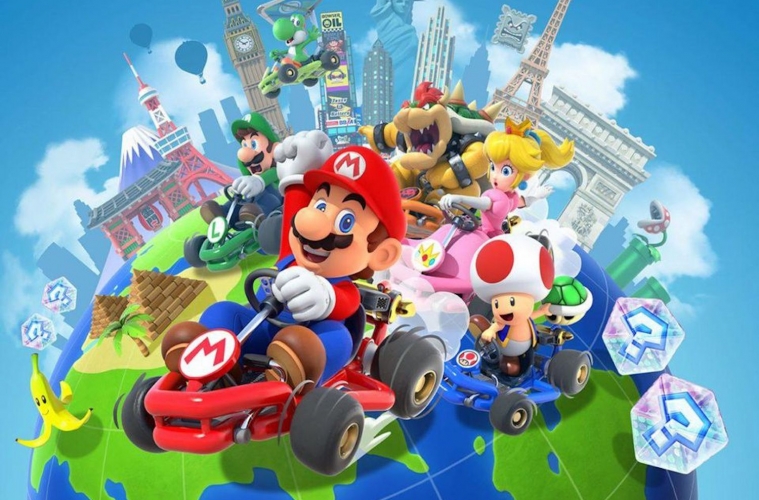 ’Mario Kart Tour’ is an app you can connect with friends on while competing against one another to move up in ranking. Race in multiple destinations that rotate every two weeks.
Rating: A Photo Courtesy: Nintendo

With 10 million downloads worldwide and still counting, Mario Kart Tour is bringing back the fun for a new audience, so I wanted to see what all the hype was about. Personally, I’ve never been into any of the Mario games and have never played them, but the second this app launched, and I saw all of my classmates playing, I had to try it.

Debuting in 1992, Super Mario Kart was the first-ever rendition of the game to come out. From the beginning, most characters have stayed the same such as Mario, Luigi, Peach, Yoshi, Bowser, and Toad. However, Donkey Kong Jr. was removed and more characters were in Mario Kart Tour. Characters like Shy Guy, Pauline, Daisy, and Dry Bones have been added to the newest version of the app.

In this version of the game, players race around courses inspired by real-world cities by drifting and steering with ease. Getting to first place is one of the main objectives and to do that, racers can collect items such as “Golden Mushrooms” that can make you bigger, the “Thunderbolt” that stuns all the players and makes them smaller and the “Red Shells” that hit the player in front of you. Racers can earn “Grand Stars” by racing or firing off one of the featured pipes to receive more drivers and karts. This is something that adds fun to the game and encourages players to continue on.

The new “Frenzy” mode allows players to have an unlimited supply of an item, in which they can become invincible; however, this mode only lasts for a short time within a race, so the user has to make the most of it while it lasts. Racers’ high scores are also important as it determines their spot to other players all over the world.

When I first started playing, I needed to create an account since I originally didn’t have one which was really simple. Users can enter their gamer ID, which allows them to play with their friends, making the game more fun and competitive. And for those who might feel threatened by learning how to play the game, a simple tutorial taught me how to play.

The main components of the game I like are the creative scenes and characters. Each level has a different location and its own features. I liked earning prizes along the journey and being able to gain a head start by holding down the number two at the beginning of the game. Being able to get an extra boost by going over the speed ramps made it more fun and competitive.

Yet, there are some game mechanics I am not a big fan of. For example, drift mode and steering can become frustrating since the vehicle is being moved on its own. Being a popular app already, Mario Kart Tour is already marketing in-app purchases. These purchases will allow access to high-speed racing mode and gold tier items for a monthly $4.99 subscription. This annoyed me because I would prefer the option of watching an ad occasionally or paying to remove the ads, but be able to earn gold tier items for free.

Whether you are into Mario Kart or not, players will enjoy the game’s versatility and the easy learning curve. Trying out this app would definitely be worth it and seeing how much fun you can have with it may spark your curiosity with other apps like this.