‘SimpleMind’ made for simple minds Boring mind maps made easy 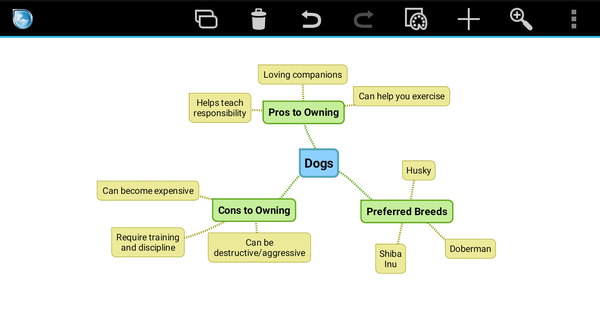 Writing ideas down by hand can be tedious and often results in jumbled thoughts, but mind maps can aid in these situations. However, an app that allows you to create these tools on your phone or desktop, such as “SimpleMind”, may not be as useful as it seems.

The app opens up and prompts you to create your very first mind map. There is no tutorial when you begin, but one is not necessary due to its simplicity. First, you must write a title for your central theme (I decided to make mine on dogs) and then you can test out the app’s features and learn as you go along.

To create a new topic on the map, you must click on your central theme in the middle of the map. This opens five buttons. As I clicked two of the buttons, I was puzzled to see that they both served the same purpose of adding another topic. The third button allows you to create notes on a topic, which are accessible by tapping on the upper right corner of the bubble—a feature I found slightly odd due to the fact that the note was hard to access and view. The next feature allows you to cut, copy, paste and add a border to topics, and the final function is to hide the branches under a topic.

After playing with the features for a few minutes, I understood how to use the app proficiently. The topics were easy to move around and create, and color customization is also featured. You can also customize the style of the main title, main branches, sub branches and text. One notable disappointment I had when using the app was that there seemed to be no way to view the mind map in a non-editing mode.

Another downfall of “SimpleMind” is that its extra features, such as exporting the mind maps you create, require the paid version. This makes the free version essentially useless, besides being able to screenshot a bland mind map. The app is also available on desktops during a free 30-day trial.

While “SimpleMind” is easy and simple to use, the lack of features and accessibility in the free version make this app a loss. The paid version is $5.99 for iOS and $4.99 for Android, a steep price for only a few more features on an already lackluster app. Next time the opportunity arises to create a mind map, you are better off making it with pen and paper.