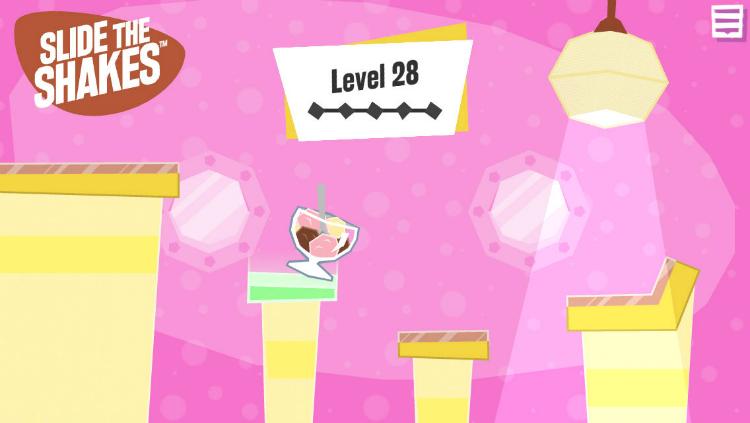 Whether it s a rich, thick milkshake or a light, refreshing smoothie, beverages can bring out the worst of people’s temptations. But in some cases, this predicament demands the best. Sliding shakes down a slippery bar may not seem like one’s idea of fun, but app developer Prettygreat transforms the stress of foodservice into an enjoyable foundation of fun with “Slide the Shakes,” an app that is a test of judgment as well as patience.

Taking place in a ‘50s diner, “Slide the Shakes” challenges players to slide shakes down a bar, but with a catch. Not all counters are made the same, so players can expect a variety of inclines, gaps and obstacles that only make it harder to advance through the levels.

Each level has multiple stages, requiring players to slide their shakes down the same counter, but to different locations marked by a green surface. After a certain number of levels, the game awards a new beverage to send down the line. From milkshakes to smoothies to sundaes, the game even provides recipes for users to follow if they want to “slide the shakes” in real life (which isn’t as easy or elegant as the game suggests).

The player must use his or her best judgment to decide how much strength is needed to send the shake into the green area. An arrow will appear with different colors representing the levels of power when the player pulls back on the shake. Dark blue is equivalent to a light tap, whereas pink, a harsh shove.

All good things come to an end, and “Slide the Shakes” is a true advocator of that. If the player applies too much power to his or her push, the beverage slides off the edge of the counter, making him or her restart from the first stage of that level. Brutal, but what other way to up the ante in a game that takes pride in its simplicity? Because some levels are as many as 10 stages long, I became frustrated with having to start from scratch.

“Slide the Shakes” is put together very well, exhibiting mastery in its straight-to-the-point entertainment style and beautiful, vibrant graphics. Although gameplay can become repetitive, the app is worthy of a few hours of play, that is, until you get addicted.

“Slide the Shakes” is available for free in the Android and Apple App Store.