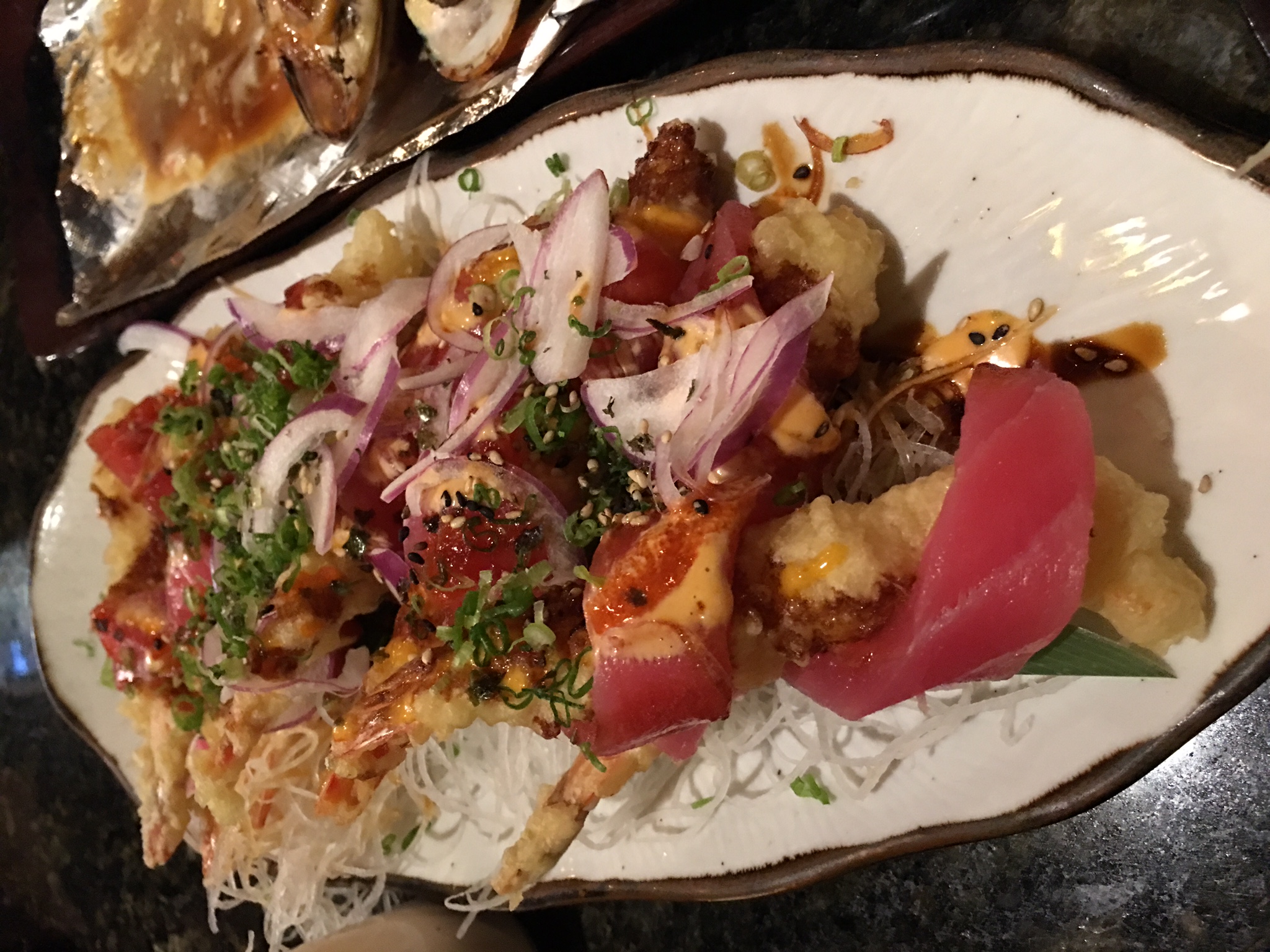 For a cheaper price than most sushi restaurants, a customer can have a party atmosphere made better by friendly employees. The variety of the food and sushi makes for a unique environment that sets it apart from other restaurants.
Rating: B Photo Credit: Adriana Cayetano

Las Vegas has its share of mediocre sushi restaurants, but not many can compete with the lively atmosphere at “Sushi Wow.” The restaurant could be easily overlooked amidst all of the fast food shops placed around Anne Rd. and Simmons St., but since their opening earlier this year they have continuously attracted customers.

My guest and I came in the evening on the weekend and expected many empty seats. Upon entering the restaurant, I noticed that there actually wasn’t a lot of space and it was filled with loud patrons and energetic employees. This made for a party environment, which could be seen as a downside if you wanted to enjoy a quiet meal.

We were offered both regular menus and sushi menus, which I enjoyed since my guest did not particularly like sushi. I purchased an “all-you-can-eat” ($23.99) platter which came with unlimited sides, sushi and a choice of ice cream. The great thing about the menu is that for the price of three rolls, one is able to get unlimited rolls and sides. The side options do not stop at the traditional edamame or miso soup, as the restaurant also offers an assortment of skewers.

Overwhelmed by the options, I gave the waitress full control of my order for the night. She chose her favorite items, along with the chef’s most popular dishes. The first item that came out was a roll topped with items such as sriracha, crab meat and an assortment of spices and sauces. This roll was intimidating, but exploded with flavor; the crunchiness and moistness due to the various sauces worked well together, and it became one of my favorite items of the night.

Before we had finished this item, the server had set oysters on the table. I was not eager to try them since many restaurants serve oysters that are too salty, almost like drinking ocean water. These, however, looked appealing and were already prepared with lemon juice and hot sauce. I decided to give the oysters a chance after seeing them on many other customer’s tables and, to my surprise, they were not salty at all.

The next item I was given was a spoon filled with tuna poki and topped with masago, or fish eggs. When I ate the mixture that was inside of the spoon, I was left confused; I could barely taste the masago due to the amount of tuna. However, the tuna was soft and melted in my mouth, which complemented the crunchiness of the seaweed and sesame seeds.

Since I was close to reaching my limit, my last item was a roll that had no rice or seaweed, so that I would not overdo it. This roll had fried shrimp topped with tuna, yum-yum sauce and sesame seeds. This item was a bit spicy and hard to eat–as soon as I would try to pick it up, it fell apart on my plate or on my pants. This item was among my least favorites, and I would not recommend this item for those who are dressed nicely or can’t use chopsticks.

As for my dessert, I have no complaints. I ordered the tempura ice cream, which is fried ice cream topped with whipped cream and a chocolate drizzle. The item was warm on the outside and melted the vanilla ice cream, making for a delicious balance of hot and cold.

“Sushi Wow” is perfect for those who enjoy a lively atmosphere and food ranging from bento boxes to fresh sushi rolls. The only downside to my experience was the loud customers, but this quality was redeemed by the delicious food and welcoming employees.