Take a bite of ‘Glaze Doughnuts’ 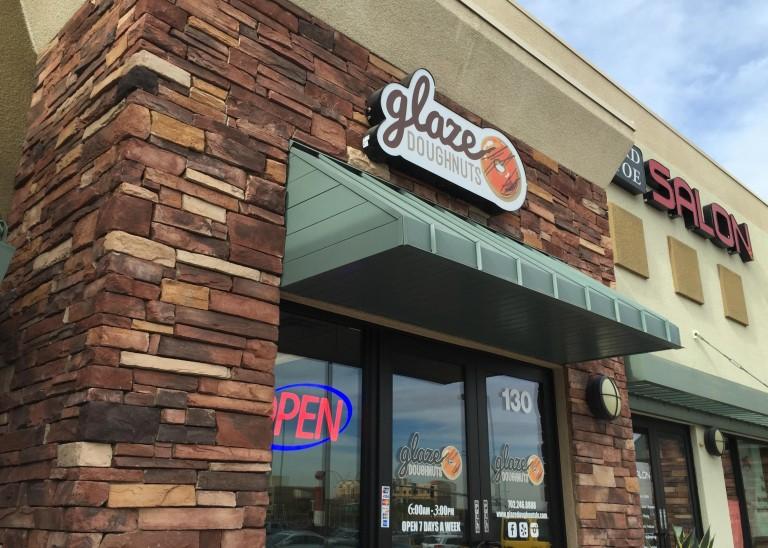 On the corner of Sunset and Fort Apache is “Glaze Doughnuts,” a new doughnut shop that features a variety of flavors and ingredients meant to satiate the sweet tooth.

Their menu spans over three categories: Classic ($1), Tasty ($1.50) and Fancy ($2.25) doughnuts, which range from simpler ingredients to premium add-ons. I was overwhelmed with making a decision between the many types and flavors of doughnuts available. Although their menu online boasts diverse recipes such as Green Tea Glaze, Fruity Pebbles and Strawberry Shortcake, their in-store availability varies day to day.

The store was bright and welcoming, but ominously empty. The furthest corner of the space was used for a case of doughnuts, a service counter, and racks of freshly made doughnuts. Service was adequate; the man behind the counter was notably friendly from entrance to exit. I ordered six doughnuts: an original glazed ($1), buttermilk ($1), fruity pebbles ($1.50), lemon-filled ($1.50), apple fritter ($2.25), and red velvet ($2.25). 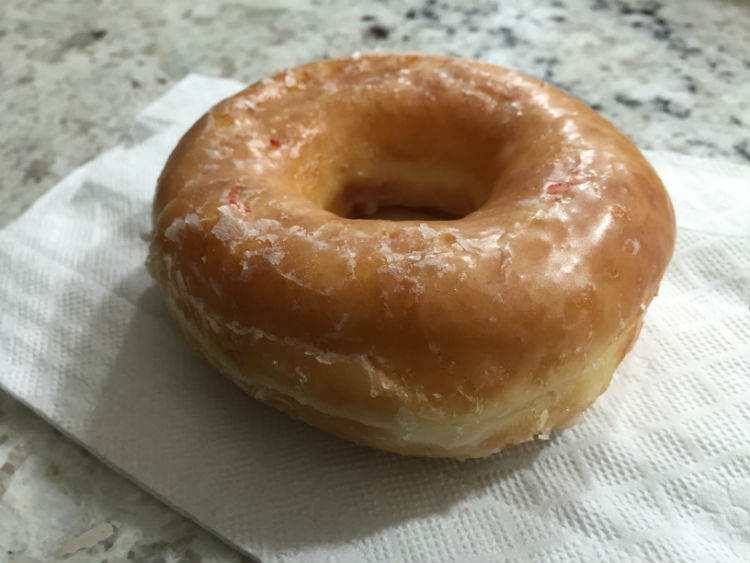 Original Glazed
The original glazed doughnut had a smooth and fluffy interior, but the glazed exterior was too sweet. 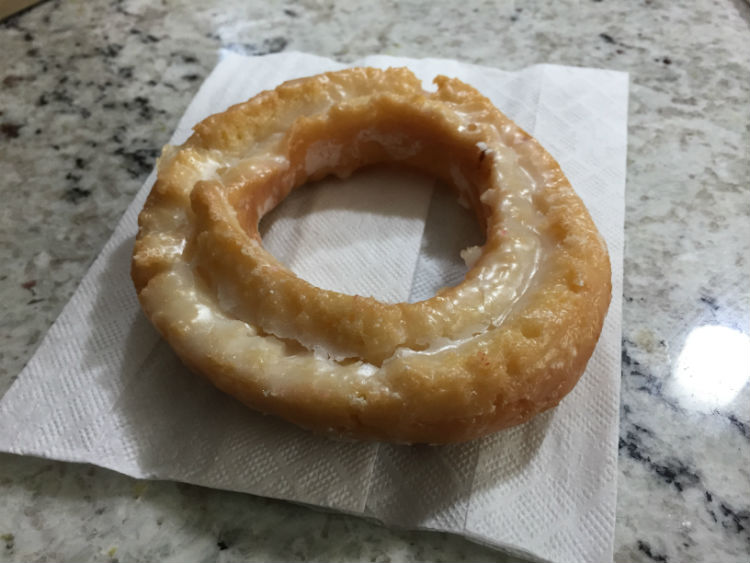 Buttermilk
The buttermilk doughnut was a cake doughnut that benefited from a more dominant cake flavor that slightly overpowered the sweetness of the glaze. 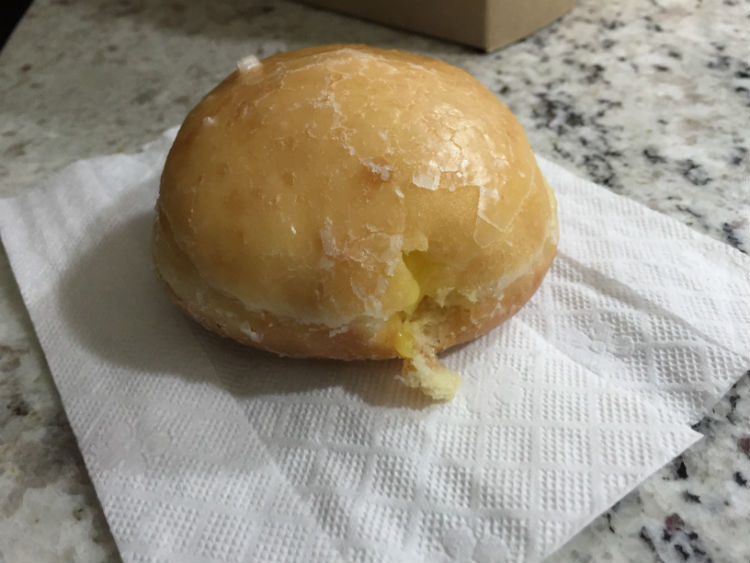 Lemon Jelly-Filled
The lemon jelly-filled doughnut maintained a balance between the sweetness of the glaze and the zest of the lemon jelly, coming out as the best of the doughnuts I tasted. 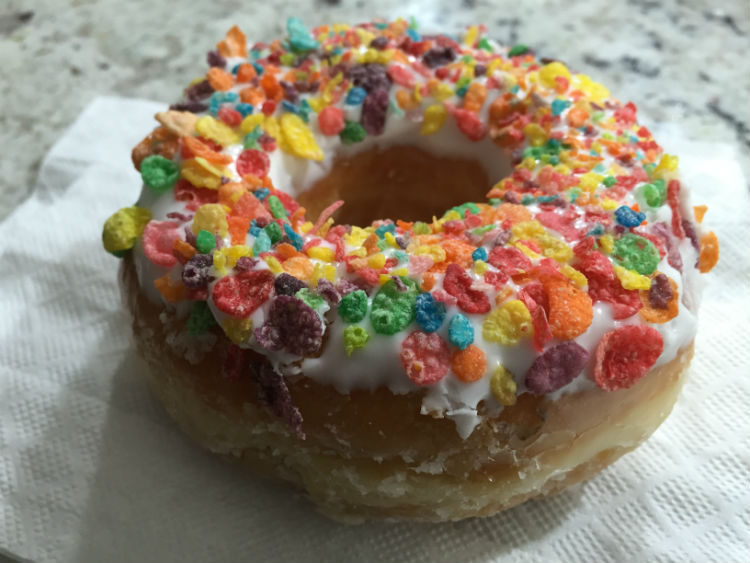 Fruity Pebbles
The Fruity Pebbles doughnut was far too sweet with the white icing added on to the glaze. The cereal brought an enjoyable fruity flavor to the doughnut, but was overpowered by the remaining components of the doughnut. 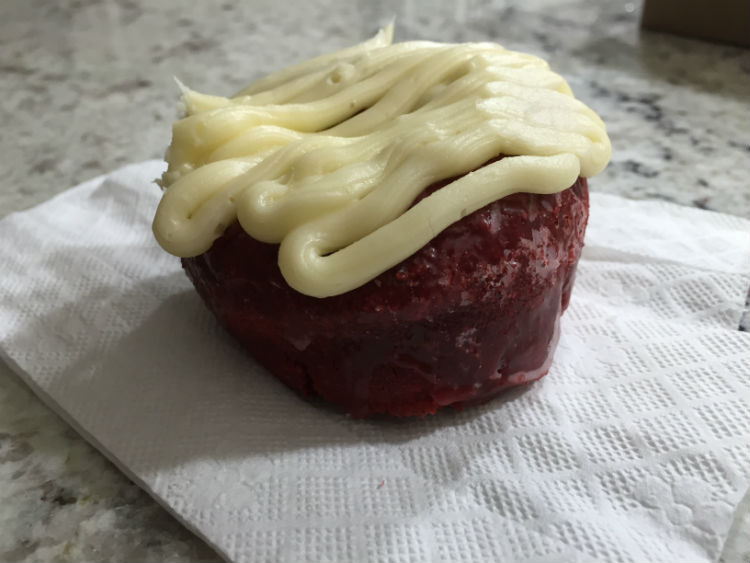 Red Velvet
The red velvet doughnut did not taste like red velvet at all and was difficult to eat. The cream cheese frosting on top was the only positive of this treat. 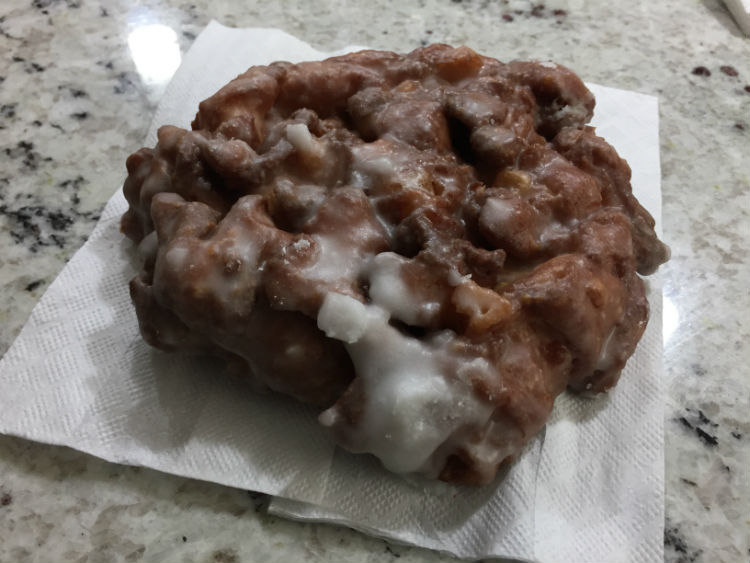 Apple Fritter
The apple fritter was a concoction of multiple flavors: the glaze, cinnamon, and apples. However, the proportion between the fried batter and apples was very uneven, and I would have liked to see more apples within the treat.

The original glaze doughnut was spongy and fulfilling, but the glaze was outstandingly sweet. Even as someone with a profound sweet tooth, three consecutive bites without a glass of water in between was too much for me. The cake-like buttermilk doughnut looked like it could be used for ring toss, but I was happier with it more than with the original glaze. The cake was soft and delicate, and the glaze was not as prominent.

Typically, I am fond of fruity pebbles doughnuts, but “Glaze” dressed theirs with a white icing very similar to the glaze: sweet. Fortunately, the lemon jelly-filled doughnut nearly hit the mark. What I liked most was that their filled doughnuts remain unfilled until you order them, ensuring a freshness unparalleled by the other treats available. The lemon jelly achieved a balance between sweet and tangy, but I would have preferred a stronger zest to further offset the sweetness of the glazed doughnut.

When I first bit into the red velvet doughnut, I expected the rich, seductive flavor it is known for, but instead, I was greeted with an artificial, manufactured taste. It was an unpleasant bite, save for the indulgent cream cheese icing on top. The apple fritter, on the other hand, stayed true to its fruitiness. The majority of the pastry was fried batter covered with glaze and cinnamon, with faint traces of apple flavoring within the batter. The apple chunks were sparse and hard to find, but provided the much needed break away from all the sweetness.

“Glaze Doughnuts” is successful in presentation and service, but could not carry their expertise over to the quality of their doughnuts. Their doughnuts are worth a try, but I would find it difficult to return for a second time unless I am desperate to satisfy my sweet tooth cravings.