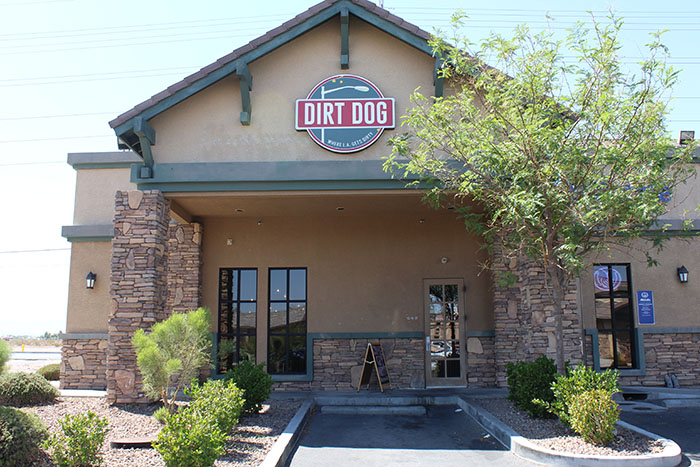 In Los Angeles it is common to see vendors on every corner, with their own spin on classic street food. Growing up, I got to experience different variations of the same dish and no two vendors were exactly alike.

“Dirt Dog” is a new restaurant, located in SW Las Vegas, based on Downtown L.A. street food which opened up its doors to hot dog lovers this summer. They serve more than just burritos and tacos; they have a variety of popular Mexican snacks and California favorites, and the memories of busy L.A. streets and bustling vendors are found in every bite.

Being familiar with Downtown L.A. street food, I can say “Dirt Dog” represents it perfectly, down to the messiness and delicious taste. Hot dog vendors in California are common and it is not strange to see hot dogs served with a toppling tower of vegetables–so, seeing the “dirty corn” ($2.95) on the menu was nostalgic. In many California communities there is an “elote” man who comes around and sells corn covered in butter, cheese, lemon and chili powder–which the corn from Dirt Dog takes to another level by adding bacon bits.

The rest of the menu consists of different styles of hot dogs with your choice of buns ($5.95), sides ($2.95) and desserts ($2-$5.75). Because of the large menu just like the ones you would find while shopping in downtown L.A., the employees were very helpful and suggested their personal favorites.

We ordered the two most popular items; first was the Green Dog, which is all beef and wrapped in bacon, with grilled onions, bell peppers in chimichurri sauce, guacamole and bacon bits. The Green Dog is my personal favorite since it has a lot of avocado which adds a natural salty taste.

Next was a House Dog in a lobster bun. This dog is similar, but this item has thousand island sauce instead of the chimichurri sauce, and is topped with ketchup, mustard and mayonnaise.

The combination of vegetables and condiments resulted in a crunchy, tangy, spicy flavor reminiscent of a Mexican dish. The lobster bun was a good choice as opposed to a traditional soft hot dog bun–the lobster bun was crispy and buttered.

Once I bit into the House Dog, the sauces dripped down my hand and I was brought back to the rowdy streets of L.A.–and the Green Dog brought me to my childhood where my grandma would use avocado in many of her home recipes. My guest and I also shared a side of crispy, fresh garlic fries ($2.95). Unlike at a fast food restaurant, the fries were not soggy and left in a fryer all day. One potential downside is that the fries were completely saturated with the taste of garlic, but I didn’t mind–since I was raised with almost every meal containing garlic.

Seeing this establishment contribute to the Mexican food culture that is often found in L.A. and bring it into a classic American dish is amazing. This restaurant stays true to the Mexican culture while offering more than the traditional Mexican restaurant. I would recommend “Dirt Dog” to anybody that wants to try food that I, along with many others, was raised on.