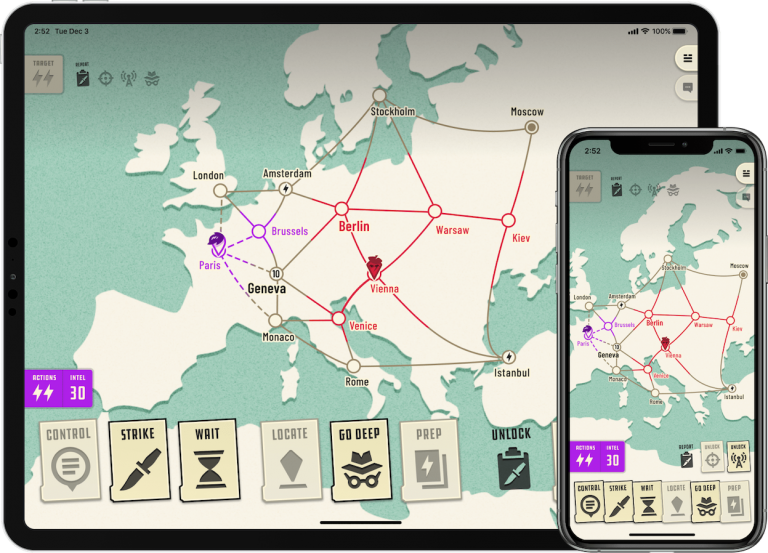 'Two Spies' is a mobile game that centers around tracking down an enemy spy and striking him, avoiding attack yourself with concealment, tactics, and cunning.
Rating: A Photo Courtesy: The Royal Pixel Service

Royal Pixel Service is a game studio and publisher which recently released an app by the name of ‘Two Spies’, a spy game available only on the App Store at the time being. After seeing Two Spies repeatedly suggested to me by the App Store’s recommended page, I had to try it out.

Two Spies is a “turn-based spy training program” taking place in Europe during the Cold War where the player is tasked to eliminate another spy in a mockup scenario. The player’s goal is to use a strike when in the same https://playspies.com/city as their opponent, which ends the round and gives a point to the player. Attempting to stop the player is the enemy spy with the same goal, who also has the same abilities and number of moves as the friendly spy.

The gameplay in Two Spies revolves around using two actions every turn to track down and eliminate the enemy spy. These actions include moving, controlling cities, waiting, striking and using ‘intel’ to unlock passive bonuses or using special actions. Players use these actions to gain cover which hides their position from the enemy, reveal the enemy’s location or attack the enemy in some way. Turns in game have a two minute time limit and a winner is determined by how many rounds they successfully eliminate the other spy.

Two Spies did an excellent job at keeping me engrossed in its game play; however, there were a few design issues which came up. One, it is difficult for someone new to the game to figure out what each action does, as it isn’t explained anywhere in the app. Additionally, the effects behind controlling cities are not well explained, taking me a few rounds of play to fully understand it. Overall, while the game has a visually appealing user interface, it is difficult for new players to understand the full extent of features.

The game is free on the App Store with the possibility of a Google Play Store release in the future. Two Spies offers multiple in-app purchases, but these are purely cosmetic. Only including different spy icons, there are no ad removals as the game is ad free from the start.

Overall, Two Spies is a game which tests a player’s wit and the ability to read through their enemy’s deceptive tactics. Every time I beat an opponent, I felt a sense of satisfaction and achievement. If you enjoy a competitive gaming app, you can fight your friends when you have a few extra minutes in Two Spies.