With a little help from our ‘Fwends’ 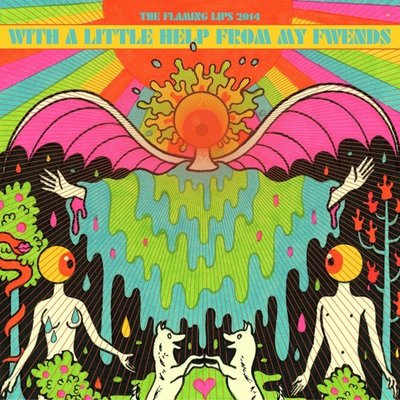 “With a Little Help from My Fwends” by American rock band The Flaming Lips is an exemplary tribute to the Beatles’ “Sgt. Pepper’s Lonely Hearts Club Band,” exhibiting trademark elements from the Summer of Love era of the ‘60s while remaining enigmatic and modern. As a balance of both the past and present, the album itself is a nostalgic treasure of an era that is long forgotten.

Forming back in 1983 in Oklahoma City, The Flaming Lips consist of Wayne Coyne on lead vocals, Michael Ivins on bass, Steven Drozd on drums and Derek Brown on percussion. The band is notorious for its implementation of ‘60s and ‘70s-esque psychedelia and rock. Since their formation, the band has been signed with record label Warners Bros. Records.

As a diehard fan of the Beatles, I was instantly pleased with the name of the album, along with its content. “With a Little Help from my Fwends” is a complete tribute to the original 1967 album, covering each track back to back with full and eloquent mystère. Unlike the original, the Flaming Lips’ take on the classic songs has far more psychedelic substance, inducing any listener into a cloudy, summer-y trance. While  Lennon and McCartney’s instrumentals and vocals are more energetic, Coyne and Drozd’s are sleepy and borderline-supernatural.

Each track has a story of its own, manifesting its own character in triumphant glory. On the famous track “Lucy in the Sky with Diamonds,” the band collaborates with Miley Cyrus, ultimately combining music of today with the music of yesterday. The track starts off as a slow echo that gracefully enters with a crescendo, Cyrus’s vocals chillingly citing the familiar opening lyrics of the song about the girl in the sky. Though I am not a fan of Cyrus, I was surprised to find myself replaying the track too many times.

In the enthralling and mystic track “Within You Without You,” The Flaming Lips amplify George Harrison’s power of spirituality and take it to an entire new level of enlightenment. Upon listening to the song, I felt as though I encountered astral projection, soaring as the lyrics, “Try to realize it’s all within yourself/And to see you’re only very small/And life flows on within you and without you,” were sung in harmony.

In “All You Need is Love,” the band takes a foggy and mysterious take on its original endearment and simplicity. The instruments are slower and softer as each band member takes turns singing lines from the song. The lyrics “Nothing you can see isn’t shown/Nowhere you can be that isn’t where you’re meant to be/It’s easy,” are captivating and prove how one can accomplish anything. While the song was far too slow and choppy for my liking, the band did an exceptional job on reincarnating a classic.

As a mixture of the Beatles, Pink Floyd and Jefferson Airplane, the Flaming Lips successfully brought back the Swinging Sixties and turned it into a more enigmatic and alluring compilation of what love should be. Rock fans of the old and new will find themselves marveling over the modern-day-turned hymns of classic rock and psychedelia.