Too good to be true The problem with deifying celebrities 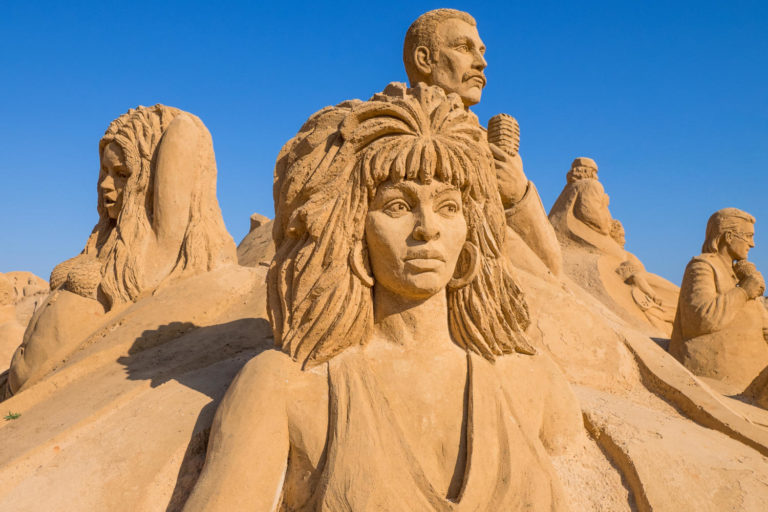 In case you couldn't tell, this sculpture is meant to be Beyonce. Some perks of being a celebrity include: being made into a sand sculpture, having constant attention, capitalizing off merchandise and getting paid to look pretty. Photo Credits: William Warby

For the past few days, Taylor Swift has been the only thing I’ve been listening to at 6 a.m. but not by choice. Because I keep forgetting to bring my earbuds on the bus, I’m forced to endure 30 minutes filled with radio hosts discussing the latest celebrity gossip, which I could frankly care less about. As I listen, I keep asking myself why people care so much.

From popular YouTubers to A-list celebrities, a number of people treat influencers’ existence as gold even though they’re just as significant as everyone else. If an artist as popular as Selena Gomez likes a fan’s post on a Twitter, suddenly it feels like winning the lottery to them. Worshiping influencers as if they’re some breed of untouchable elites, people tend to deify celebrities so much to the point that it becomes unhealthy.

Whether it’s online stalking or buying merchandise, fans refuse to see celebrities as regular people because they gain a strong emotional attachment to influencers through their art. With actors, people see their favorite characters from movies or television shows. With music, people are reminded of the way their songs makes them feel. With artists, people view their personalities as abstract as their art.

Because of this, some fans will find ways to justify an influencer’s actions, refusing to accept their flaws. For example, despite confirmed acts of abuse, artists like XXXTentacion and Kodak Black are continually embraced and defended by their fan base. People often dismiss negative or controversial decisions made by celebrities simply because they’re famous.

This is the same reason why the media prioritizes Kylie Jenner’s alleged pregnancy over the earthquakes across Mexico and the widespread famine from South Sudan to Yemen. It’s only human nature to want to pretend that the world isn’t turning upside down, but it’s naive to pretend that important world issues aren’t happening. As people distract themselves with celebrity gossip, they refuse to admit that others are suffering around the world.

I know that there’s no harm or foul in admiring a celebrity. I’m not knocking the fact that some influencers are genuinely kind hearted people, but there are more important things in life than what Selena Gomez has for breakfast or what Kanye West decided to wear today.

Sure, a like on Instagram or a retweet on Twitter are nice ego boosters, but trivial things hardly benefit you or anybody else in the long run. Don’t forget that even though you’re a fan, you’re a stranger to celebrities. There’s no point in getting distracted from the world for the sake of

When you let others influence your own personal views and distract you from the world, you lose a sense of individuality and control over your own thoughts. It’s better to invest effort in people and movements that deserve to profit off attention as opposed to celebrities who already make millions.