Borrowing a piece of ‘The Secret World of Arrietty’ 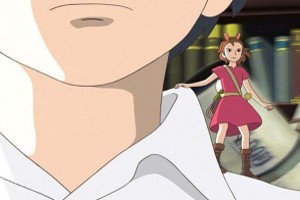 Disney’s anime film, The Secret World of Arriety, featured “tiny people” and how they make it through their day to day life.Photo Credit: Toho

Compared to “Spirited Away” also created by Japanese Studio Ghibili and released by Disney, “The Secret World of Arrietty” is inferior at best. Rather than an array of gods and strange creatures in a spirit world, Arrietty’s world is nothing more than another rendition of “Thumbelina” minus the prince.

The 14-year-old Arrietty Clock (Bridgit Mendler), along with her mother and father (Amy Poehler and Will Arnett), are borrowers, a race of four-inch tall beings who borrow items from humans for their own survival–things that are usually left unnoticed when they have gone missing. However, their one rule is to never associate with the humans. Arrietty, as bold and spirited as she is, ventures through a house and is spotted by a sick teenage nephew, Shawn (David Henrie), who forms an improbable friendship. Little does Arrietty know, her interactions with Shawn will endanger her and her family. They rebel against the housekeeper, Hara (Carol Burnett), who wants nothing more than to be rid of the little people.

These hand-drawn animations are meticulous and impressive, such as the beautiful plants and flowers in the garden and the pieces of clutter scattered around the house. While Arrietty and her father was in the kitchen, it felt as if I was as small as them because of the huge counter tops and the sugar cubes being bigger than their heads. I like all of the attention placed in the tiny details throughout the whole movie, especially the rich colors, because it creates a merry and tranquil vibe that is attractive to the viewers’ eyes.

Although the animations are delightful, the storyline is too slow and relaxed. Initially, I expected for a little more thrill than the unhurried build up of tension. If additional energy and conflict were included, the story may have been more thrilling.

Don’t get me wrong, this movie is a great family film. We should have a little borrower spirit inside of us and turn simple household objects into something useful as well. Sure, we are not as small as they are, but we can still come up with creative ideas. The tip of a funnel could be bent a bit and used as a hook to hang up a coat. A scoop of cooked rice could be used as glue. The creativity of the movie was on point, but the lack of suspense needs to change.