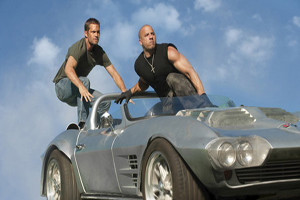 Since Bryan O’Connor (Paul Walker) and Mia Toretto (Jordana Brewster) decided to break Dominic “Dom” Toretto (Vin Diesel) free before entering into the jail facility at the end of Fast and Furious, all three are now fugitives wanted by the U.S government. Picking up where they left off, Fast Five, the fifth addition in the Fast and the Furious series, is the most action packed by far.

After their escape. they make their way to Rio de Janeiro where all three are being hunted by Federal Agent Luke Hobbs (Dwayne Johnson). In order to gain their freedom, they must assemble and complete one last job in order to guarantee their financial and personal freedom.

To me, characters felt like they could have been more evolved. Since we already know these characters, the writers for this movie could have included more information or background about the veteran characters. On the other hand, I do like how the movie was able to keep all the original characters from the previous movies.

The new characters chosen for this film, like patrol officer Elena Neves (Elsa Pataky), could have been more confident. She seemed nervous in some of her scenes, as if she was anxious to get her part over and done with.

Fast Five was packed with special effects that captivated the audience’s attention, as well as a wide variety of flashy European cars. With these things combined, it makes the movie that more action packed and intense.

With an action filled movie like this, I would consider this a movie enjoyable for all ages.