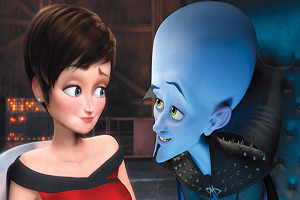 DreamWorks’ “Megamind” is based on the battle between good and evil, much like the story of “Superman,” only molded to suit the 2010 audience who now expect their films to be presented in 3-D.  Even though “Megamind” had 3-D screenings, spending the extra money is unnecessary because the movie is not as brilliant as it seems to be.

The opening introduces the narrator, the villain Megamind (Will Ferrell) and superhero Metro Man (Brad Pitt).  Both characters were sent to Earth from two different dying planets.  During childhood, Megamind desperately wanted to impress people, but with Metro Man playing the “good” part as hero of Metro City, he decided he will be the reverse:  the villain.  Their battle patterns are simple; Megamind kidnaps reporter Roxanne (Tina Fey), Metro Man saves Roxanne. Metroman wins, and Megamind loses.  Suddenly, Megamind becomes the ultimate ruler of Metro City, but he realizes that bad cannot exist without good.

The problem with “Megamind” is that most of it is recycled from other superhero movies.  It even infused certain aspects from DreamWorks’ earlier production, “Despicable Me,” and created a sense of déjà vu with the Minions (voiced by David Cross) and the villain-turned-hero.  Additionally, there was a scene reminiscent of “The Incredibles” when Hal (Jonah Hill), the nerdy camera-reporter, becomes the ultimate villain because of his new powers.  Because of these evident similarities, “Megamind” has an exhausted story line lacking new concepts.

For the most part, the plot is painfully predictable in comparison to other largely-known movies, but that is Megamind’s appeal to young children and families because it is easy to follow.  Many animated films are enjoyable and memorable, like “Kung Fu Panda,” “Up,” and the “Shrek” series, but “Megamind” just does not compare.  Personally, the movie needs more improvement by implementing original concepts in order to reach the audiences’ expectations.