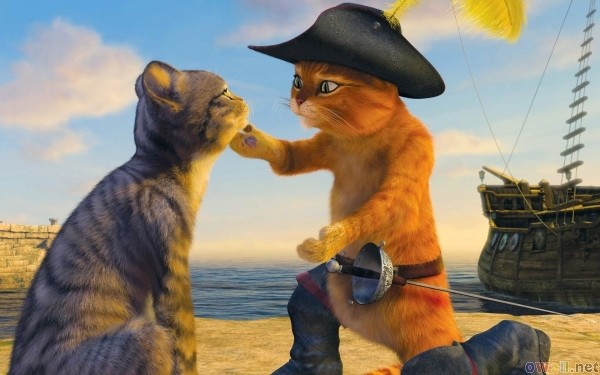 DreamWorks sucked the last creative juices from the Shrek series after the lackluster Shrek Ever After and now one of the main characters, Puss in Boots, in an all-new storyline as means to keep the franchise alive. Despite being an avid Shrek fan, my already low expectations for a spin-off were barely met.

Puss (Antonio Banderas) takes us on a humorous, yet predictable, journey into his past. The audience is introduced to his long-time friend, Humpty Dumpty (Zach Galifianakis), and his new “soon-to-be-girlfriend” Kitty Softpaws (Salma Hayek) tags along on his journey in finding the “magic beans” that will lead them to a giant beanstalk. The creators also included Jack and Jill as the villains who are trying steal the magic beans. Puss, Humpty, Kitty, Jack, and Jill are all racing to steal the Golden Eggs at the castle on top of the Beanstalk to provide a lifetime supply of riches.

Even though the movie has some rough edges throughout it’s storyline, the writers of the movie do a really great job of nonchalantly incorporating humor for the more mature audiences. Puss’ relationships and his love interests are a great way to keep the adults involved in the film. The movie includes a lot of cat humor, such as the “(G)litter Box” where all the “cool cats” hang out. It may have a mix of humor for adults and their young ones, but that draws the line for the better aspects of the movie.

“Puss in Boots” did have some brilliant moments, but it really didn’t soar above and beyond like Shrek. Some of the jokes were overkill, the plot was squeezed into such a short time, and the movie was redundant when relating it to its companion film, Shrek.

Sure, it was great to learn about Puss and his past, but the story lacked interest that was needed to be able to make a reasonable impact on its viewers.