DLC: Don’t listen (to the) customers Having to pay $110 to experience a full game should not be an industry standard 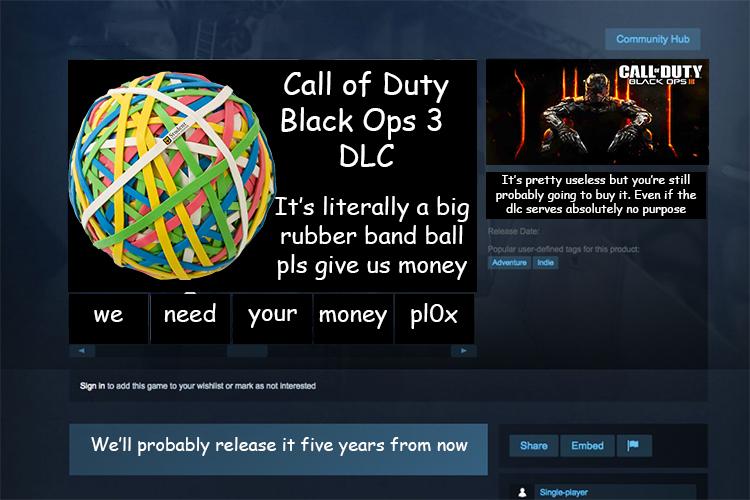 Remember when you only had to pay up to $60 to play a game at its fullest? No? Well that’s because large gaming companies like Electronic Arts, Bethesda, Ubisoft and  Activision release the same cut-and-paste video game every year along with a $50 season pass in order to experience new content.

On the other hand, this downloadable content does extend the lifespan of a video game—but so do free updates. Games like: Dota 2, Counter-Strike: Global Offensive and Team Fortress 2 are extremely popular games that refrain from having their player base pay real money just to have an additional hour of fun. These games are structured competitively so that the only advantage one has over the other is pure skill alone.

“Boo-hoo, Vinh Tran is complaining about video games, why should we care?”

However, there are still many games where a single swipe of a credit card will absolve all obstacles and will grant whoever has a pocket deep enough a large advantage over casual players. Basically, every game on most app stores is guilty of this. Not even Blizzard Entertainment can turn their heads away from greed; their popular game Hearthstone can be played in many ways, but over a hundred cards are locked away with a $20 price tag.

Having content locked away holds fairness hostage, and some companies even use DLC to sell parts of a game that were originally part of the base game. Namco Bandai and Capcom are notorious for having DLC already on the disk—like when one had to pay $7 just to see the actual ending in Asura’s Wrath.

While DLC is known to give an upper hand to some players, some serve no purpose. The Elder Scrolls: Oblivion charged $2 for horse armor; yes, that’s what I said, horse armor. The notorious Train Simulator franchise is a game where you move trains—riveting right? What’s even worse is that they charge over $5000 for additional trains.

I know what some of you might think, “Boo-hoo, Vinh Tran is complaining about video games, why should we care?” This is not just about video games. The whole situation is focused on the way large companies take advantage of their customers. I’m sure a large majority of you reading this would be off-the-rails if a company forced you to do something—oh wait, Microsoft has already done that.

While what I say will most likely be ignored by the fat cats at EA, large video game companies should start listening to their customers or soon enough they might not have any. I am really tired of having to spend $90 to enjoy Fallout 4 at it’s fullest—or I could just be tired from playing so many video games. I should probably go outside.