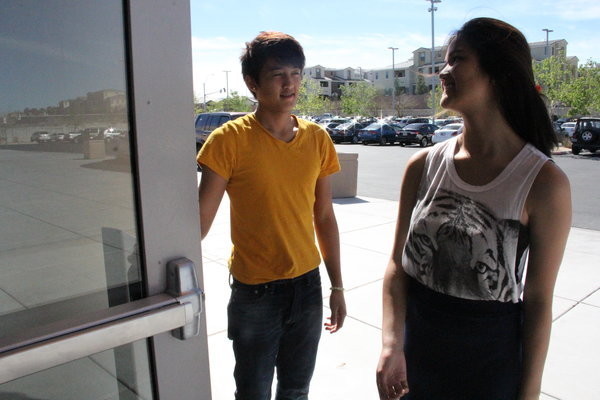 Opening a door for a lady proves hat chivalry is not dead.
Poto Credit: Tamara Navarro

It is true, there are not many people who go out of their way to do some of the cliche and romantic acts you see in movies anymore. No more guys opening the passenger car door for girls. No more people near the flower section in the stores buying a rose or a dandelion for their significant other. And of course, it is rare to see people giving up their seats for women out of the kindness of their heart. But, does this really give a justified reason for saying that “chivalry is dead?”

The quick and simple solution to this problem is no. Just as one of my friends told me before, chivalry is not dead, it is only in hiding.

Just today, my friend gave some good insight on the whole “chivalry is dead” topic. Although he sounded completely ridiculous since he was saying it with a fake thick accent, he did have some good points. For example, he pointed out that anyone who does act chivalrous in public can be ridiculed by those around them.

Sure, there might be some people who think it is still romantic, but to be completely honest, the younger generations probably have no idea what “chivalry” even means. And of course, although everyone hates to admit it, opinions, even from younger children, are hurtful if they are sincere.

Even after he was done talking, it stuck with me for a little bit. All this time I really did think chivalry was dead. I mean, can you blame me? I cannot even recall the last time I saw anyone go out of their way to be romantic with a girl in public let alone try and be a knight in shining armor for her.

Now, I am thinking about it on a whole other level. Instead of chivalry being dead, maybe it is just in hiding. Maybe people are just too scared and want to hide their acts of chivalry in order to avoid being ridiculed by society.

But do not think that there is no one in the world that still tries to be as romantic as possible. I mean, there are times where I see an amazing event happen in public or I see someone completely in love with their significant other. But, the fact that these kinds of acts only happen once in a blue moon makes it seem as if chivalry is dying, and fast.

Maybe the topic of “is chivalry dead or not” will go unanswered forever. Is it hiding? Is it still alive and well? Or is it already gone? I guess the world may never know . . .