Finding certainty in doubt, and vice versa Exploring the connection between doubt and certainty 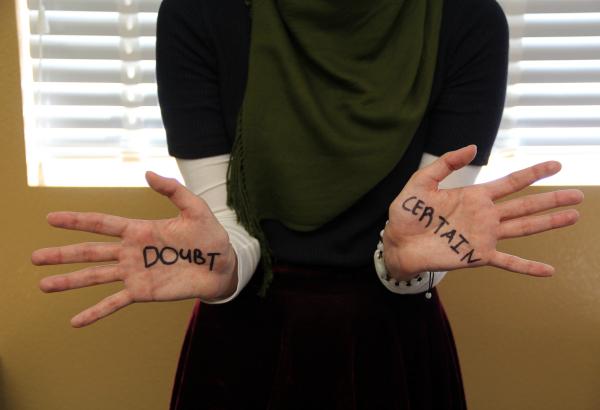 Although certainty and doubt seem to be two different concepts, the two must meet in the middle for a healthy balance. Photo Credit: Althea Gevero

Recently, in riffling through some of my old AP English Language and Composition materials, I came across an old timed writing prompt concerning the relationship between doubt and uncertainty.

William Lyon Phelps (author, critic, scholar) and Bertrand Russell (philosopher, logician, mathematician), both successful individuals, have expressed two contrasting perspectives. While Phelps believes that certainty is the key to “accomplishing virtually anything,” Russell feels that some measure of doubt is necessary in any philosophy.

This prompt elicited an inner pow-wow between my own thoughts on certainty and doubt—long after I first completed my essay. Although I had taken the stance in my essay that an individual’s certainty and doubt should work together rather than contradict each other, I felt it necessary to delve deeper into the “how?” and “why?” of this topic.

To me, certainty is maintaining confidence in one’s beliefs, and advocating their validity despite the mindsets of others or any other contributing factors. An individual who comes to mind when I think of certainty is Kanye West.

When one unconditionally and wholeheartedly believes in him/herself, any measure of doubt from others becomes white noise in the symphony of one’s ability to create.

Though many see Mr. West as an egomaniac, the trust and certainty he has in his beliefs and abilities allow him to achieve his greatest potential. People are constantly telling others what they can and cannot do, but when one unconditionally and wholeheartedly believes in him/herself, any measure of doubt from others becomes white noise in the symphony of one’s ability to create.

This is a notion that, as West described in his lyrics (“Dark Fantasy”), can be transcribed to “finding bravery in [one’s] bravado,” or finding courage to express one’s bold beliefs or ideas.

However, one of the downfalls of certainty can be stubbornness or possessing a narrow minded attitude. This is where doubt begins to play a role. Doubt can act as a reminder for even the most certain of people that nearly everything has the capacity to be debatable, and their beliefs are not irrefutable.

Having doubts allows for a more open, flexible and adaptable mindset and prevents ideas from being too one-sided. After all, some of the world’s greatest discoveries were born from doubt.

The key to avoiding extremes on either side is to find a healthy medium. Individuals should come off as certain and confident in their beliefs—the “fake it ‘til you make it” method can be effective in that regard.

While one is simulating certainty, it is important that they internally question the validity of their own beliefs. They should listen to other viewpoints, and weigh the various perspectives in their mind. While passion is necessary in powerful beliefs, it should not blind one from seeing other perspectives.