Hate: a negative impact with a strong bond 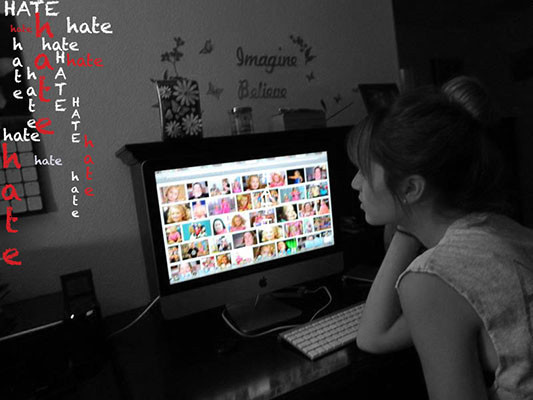 When hate builds, and a bond is created between two or more people, it is easier to get accommodated with the group.
Photo Illustration: Alex Nedelcu

Do you ever notice the personal bond you create with someone when you both hate the same things, like country music and overpriced salads? I mean, sure, a bond is also created over the things you love (i.e. brown-haired, green-eyed boys, and Audrey Hepburn’s style in Breakfast at Tiffany’s), but bonding over the negative can be so much more satisfying.

A couple of days ago, I found myself watching Scrubs on Netflix, and started to overflow with negative feelings for the show itself. Ugh, I hate this. But, I still didn’t dare turn it off. Oh my goodness, this is so stupid. Of course he’s going to go for the hot girl. OF COURSE THE HOT GIRL IS THE SMART ONE. The disgust continued until the first episode of the season ended.

It is not completely heartless to mention that the stronger the hate, the closer the bond, is it? I proceeded to watch Episode 2 of Scrubs, and believe it or not, the hate grew. Oh, big deal, you try to convince someone to stop smoking. Since my day started out with hate, it proceeded to turn into a positively “hateful” day. My close friend came over shortly after my experimental Scrubs binge, and we decided to go to Starbucks for a quick, much needed fix.

“UGGGHHHHH!” I heard her say from the passenger’s seat, and glanced at her with worry. Is she in pain? “I HATE it when people post stupid comments on my Instagram pictures!”

Almost immediately, my hate-bulb sparked, as I realized that I felt the same way. And just like that, the bond grew like moss on rainforest rocks. Hate-bonding is much like love-bonding, mainly because hate (just like love) is the sharing of ideas and morals. Hatred can reveal so much about a person.

I let out a girly “omigosh,” as we sat in the car during the unnecessarily long Starbucks wait and elaborated on our hate-similarities (which soon turned into love-bonding over Dave Franco). This was almost as satisfying as the Lime Refresher I decided on (pretty smart choice for a scorching-hot, hateful, sweat-running-down-your-face Vegas day).

But, when should the line be drawn, and when is the hating supposed to stop?

Nearly every movie with a high school centered plot includes bullying such as Mean Girls and The Outsiders. Hate-bonding over someone can easily be considered a form of bullying due to the negative emotional impact that words and actions can cause. Believe it or not, hate-bonding in fact meets the criteria of bullying.

Although hate-bonding is a prime example of how negative feelings and thoughts can create connections, it should not be used with the intent to solidify a relationship. There is a plethora of ways to build and improve upon a friendship without having to include negativity. The moment you result to negative actions or thoughts, you may not trust your friend’s or your intentions, due to your judgmental attitude toward something that your friend could take interest in.

Regardless if you are a hate-filled person by nature or not, you should never hate on someone directly. Ultimately, hate-bonding could be a destructive activity, but like most things in life (makeup, gossip, sodium, and shopping), hate-bonding should be practiced in moderation.