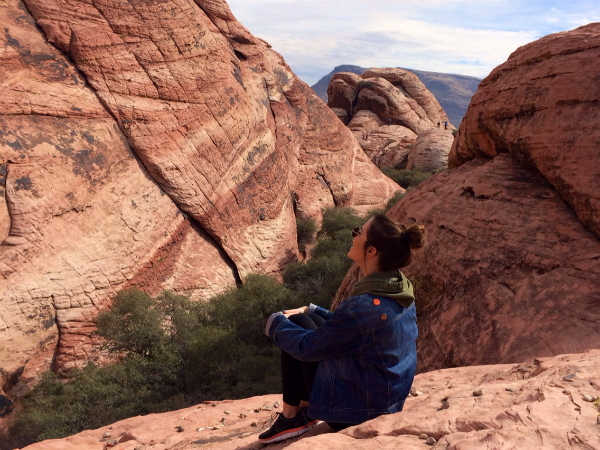 Sometimes you have to wind down and look at the positive sides of life before finding yourself again.
Photo Credit: Purna Patel

Breakups are tough. No matter how long the relationship lasted, or if it was even considered a relationship at all, being accustomed to a person and then having to walk away is not easy. Nobody wrote a manual about how to not think about it, and quite frankly, your mother’s echoing voice saying, “He wasn’t for you!” isn’t a positive thought either. So, you weren’t Catherine and Heathcliff or Edward and Bella, but breakups are, without a doubt, difficult.

A month after my most recent breakup and an awkward run-in, I was finally starting to feel like myself again. I caught myself not thinking about it at random times during the day, and cheesy jokes started to sound funny again. Granted, I was not completely healed, but I was on my way to happiness. A group of friends and I decided to go hiking at Red Rock one weekend, and though I was skeptical about spending a few hours away from tea and books, I agreed to join them on this adventure.

There we were: the broken hearted, adventurous, intelligent, and humorous 16-18 year-olds, jogging, laughing, and joking as we climbed rocks and snapped photos here and there. I don’t know whether it was the mountain air or the fact that I was around such different, but similar people, but for a few hours, everything in the world seemed so small (the breakup included). I no longer feared being alone, like I had been the past month. I no longer wondered what he’d been doing, or who he was with. Nothing, except for this group of people and this particular location mattered. I was on top of the world.

I realized that I spent an entire month of my life worrying about reading my horoscope at 10 AM every morning to see how my day would turn out. I feared checking my social media because of what I could possibly see. I sought comfort in deep, emotional poems on Tumblr, and in return, I wrote some as well. I read books about tragedy. How did I expect to overcome it and find happiness when my activity of choice was to be hurt? The idea of breakups is much tougher than the way they actually are.

Was it even a hardship at all? Did I really have to put myself in such a horrible position because a relationship was not meant to be? No. No, I didn’t have to. At the peak of our hike, all of the long text messages, poems, sleepless nights, and tears vanished. As a matter of fact, most hardships that ever scarred me were irrelevant. I only hoped that when I arrived back to reality, I would feel the same. I hoped that I can always find comfort in myself, just like I did that day. I hoped that I can laugh as wholeheartedly as I did then, and I did. Nothing has changed since that day.

WHERE ARE THEY NOW: Kelsey Rowan Working towards becoming a Respiratory Therapist

After a breakup, we tend to make more hell for ourselves, due to the pent up and unspoken feelings of guilt, and self-pity. However, nothing about reading your horoscope at a set time during the day guarantees fulfillment. Comfort is not buried in deep poems. Comfort actually lies within oneself, and when I realized that I had to break away from those negative feelings, I ditched the mundane activities that made me hurt more. I was on top of the world then, and I am on top of the world now.