The inevitable generational divide Nothing personal–just the circle of life 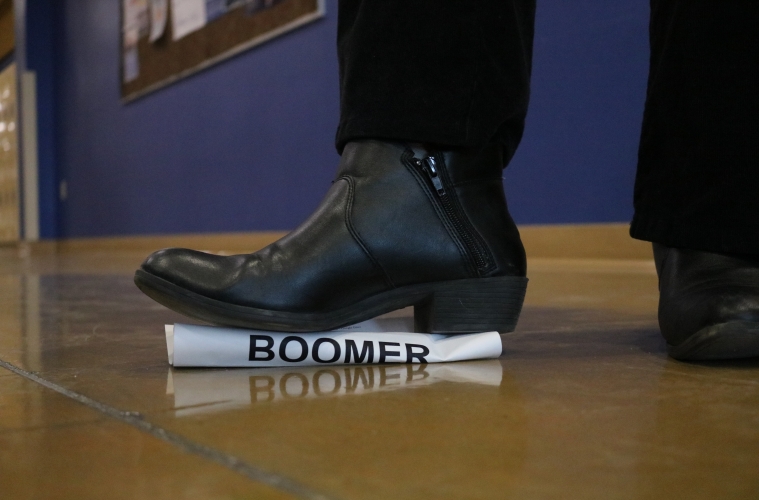 Younger generations have taken all the remarks from baby boomers for seeming “lazy” and “unmotivated” for years, but as soon as we took a jab back suddenly it became war. Photo Credit: Alyx Beeten

“OK Boomer.” What started as a couple of teenagers on TikTok using this new phrase for fun has turned into a generational war. Younger generations of today have been creating videos imitating the irritating habits boomers have, like asking to see the manager at the slightest inconvenience, as a response to the older generations stubborn traditionalist mindsets. Although this trend has brought Generation X and millennials closer, the term is sparking outrage with baby boomers–who find it offensive. Some have even gone as far as comparing the response ‘OK Boomer’ to the N-word.

Boomers, people who were born during 1946-1964, seem to have forgotten what it was like to be our age. Every generation has a disconnect with those older than them–we are growing up in a different decade and are influenced by different trends–but still boomers are incapable of accepting our generational differences. They grew up with rotary phones and print encyclopedias while we grew up with iPhones and Wikipedia–they cannot expect us to be like them.

To keep it real, boomers have belittled younger generations for being “less motivated” than they were at our age for years and we have taken the heat. The elders even have gone so far as blaming us for killing department stores and family restaurants like Applebees. But once we started responding back, we became, in their eyes, the most disrespectful people to graze the Earth.

And it is not just on TikTok. Our generations are using the technology that boomers didn’t have growing up to give them a taste of their own medicine. We are creating merch, songs and even hashtags to show that we aren’t as lazy as they make us out to seem. Even if younger generations may be having too much fun with this trend, we don’t genuinely hate boomers–so there is no need for their anger. Boomers are better off saving their frustration for bingo night or the next knitting match.

It must be frustrating living with a society of people who no longer shop at department stores, have redefined wedding ceremonies and have no interest in golf. Times are tough for boomers, and when you can’t connect to the young people anymore I am sure it really grinds your gears–but it is not the end of the world.

If it makes them feel any better, soon we will be in their shoes too, with possibly no true connection to the younger folks. We just have to be ready to see younger generations slapping “Bye Zoomers” on their hydro flasks and creating songs about us stealing from Walmart. It is an intangible circle of life; it’s just baby boomers turn for the ridiculing.