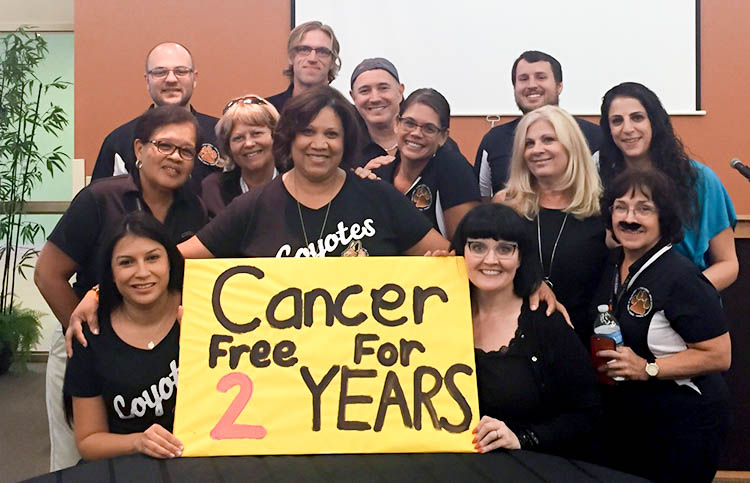 365 days. 365 days of losing strength, of withering away, of watching her family worry for her, of missing out on vacations and events and life.

730 days. 730 days of being at home, of spending time with family, of enjoying time at work, of waking up knowing she won.

“At first everyone thought it was a fatty tissue that is typically benign,” Sifuentes said. “But as soon as my doctor saw it he knew it was a cancerous tumor. He asked if I wanted to call someone so that he could go in depth into the diagnosis and I said, ‘No!’ I just wanted him to tell me, ‘What are we going to do about this?’”

Immediately, Sifuentes’ family and life came to mind. She thought of how from this moment forward, her life would never be the same.

“I thought of my family, work and how my life was about to change,” Sifuentes said. “I never thought I was not going to make it. On the contrary, I told everyone, ‘I’ve GOT THIS! I am going to be FINE.’ I just knew that I had to secure my medical insurance, life policies and find a way to tell my family.”

I thought at times that I could not stand the pain. It makes your esophagus raw and made it difficult to keep food in your stomach or go to the bathroom.

She agreed to surgeries and intense treatment to cure her unusual form of cancer.

“My first surgery was scheduled for Oct. 24th, 2013, then I had a second surgery on Dec. 4, 2014 at UCLA (University of California Los Angeles) where they removed a larger margin so that it would not spread,” Sifuentes said. “After a few months of healing, I started a rigorous program of radiation that lasted 33 cycles. This was a daily treatment of 30 minutes of what felt like being fried. I followed with an intense form of chemotherapy where I was hospitalized for seven days every two to four weeks.”

After her operations, she underwent chemotherapy, opting to take drugs which would target and kill the cancer cells.

“I got chemotherapy around the clock for the full stay,” Sifuentes said. “It made me really sick, lowered my white blood cells compromising my immune system and often times I needed a blood transfusion. When that happened, they had to stop the chemotherapy drugs until I gained some strength. I thought at times that I could not stand the pain. It makes your esophagus raw and made it difficult to keep food in your stomach or go to the bathroom.”

Family gatherings, vacations and work were all missed due to the cancer weakening her body and forcing her to stay in the hospital.

“I did not work for an entire school year,” Sifuentes said. “That was really hard but it motivated me to get well so I could return the next school year and I was able to do it. We had a family reunion planned to Puerto Rico and I was not able to attend. I am sure that I will plan a vacation sometime as soon as I get some of these medical bills paid off.”

Although she had to miss work and treatment was painful, it still did not compare to the pain of witnessing her family fear for her health.

“The hardest thing for me was watching my loved ones worry about me,” Sifuentes said. “I could handle it all but not watching my mother and children worry if I was going to live or die.”

My family is the most important thing for me. Their reaction in knowing that I no longer needed chemotherapy was priceless.

However, family was also her greatest source of strength, offering support and love when she felt weak.

“My family and boyfriend, Rick, helped me during this difficult time and provided unconditional love and strength,” Sifuentes said. “My sister, Rosa, that lived in Atlanta at the time moved to Las Vegas for months to help take care of me. I moved in with my mother Adela so I had help 24/7. I was driven everywhere and taken to doctor appointments all the time. I took several trips to UCLA with my sister and sister in-law, Keriann. I also had great colleagues and students that visited to lift up my spirits.”

After a year of doctor’s visits, chemotherapy sessions and surgeries, Sifuentes received the news every cancer patient hopes to hear.

“I was declared cancer free or on remission as doctors want to call it Sept. of 2014,” Sifuentes said. “I am still on a six month MRI and CT Scan check up to make sure that nothing else has resurfaced.”

Over the past two years, she has been able to return to work and reflect on her experience.

“[The most positive part was] Feeling stronger than I ever thought possible,” Sifuentes said. “My family is the most important thing for me. Their reaction in knowing that I no longer needed chemotherapy was priceless.”

Sifuentes hopes her struggle will serve as a model for others in a similar situation.

“It is a difficult thing to go through,” Sifuentes said. “It is a matter of faith, hope and love. Do you have a pity party or do you get up and live each day to the fullest? I could not allow cancer to dictate what I was capable of doing and how I was going to live my life. You fight with all you have and in the end, you know you did everything you could.”