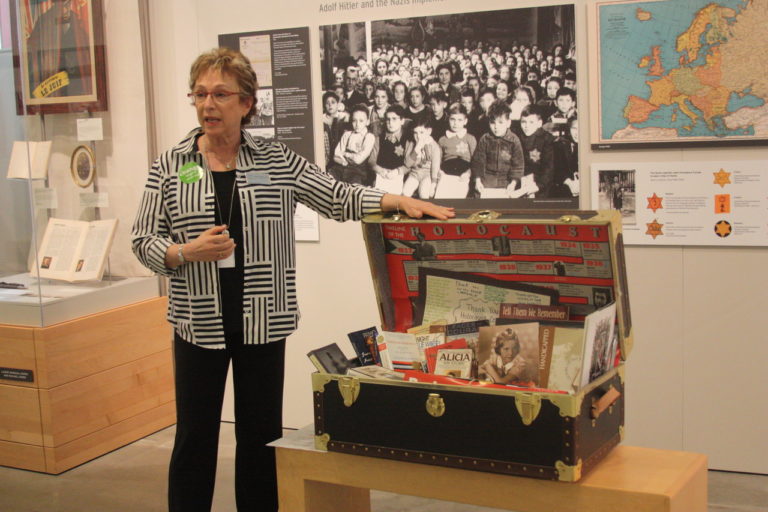 Describing the story of a chest that the Holocaust Center for Humanity received, special projects coordinator Laurie Cohen works with a small staff to educate the community. The museum is open to all ages and all audiences. Photo Credit: Althea Gevero

The students stare wide-eyed and engaged, listening to the speaker share his story. He comes to a close, wrapping up the final details as the students let the knowledge sink in–connecting what the speaker has to say to their own lives. As he finishes explaining his experience during the Holocaust, education associate Julia Thompson sits in the back, knowing all of her work to organize this interaction was successful.

For over two years, Thompson has been a full-time employee of the Holocaust Center for Humanity, a non-profit museum in Seattle, WA. The Center was formed in 1989 by a group of Holocaust survivors looking to educate the local community on the events of WWII through storytelling. Over the years, the museum has expanded upon their humble beginnings–and it would not have been possible without people such as Thompson.

“The personal survivor stories are what really started us,” Thompson said. “Survivors have been the driving force behind the Center from day one, and of course they continue to be, although we’re very aware of the fact that they don’t have much time left. But that’s what makes it even more important to preserve their stories and their artifacts.”

The museum is run by just a few staff members, including Laurie Cohen in charge of special projects and longtime volunteer Linda Elman. While each has a different background, all three women promote the same mission statement: “Inspire teaching and learning for humanity in the schools and communities of this region through study of the Holocaust.”

“I am Jewish,” Elman said. “In my early 20s, my husband and I went to Europe and he was drawn to every Holocaust site. In Amsterdam, we were in the state museum and they had a small Jewish museum. There was a side room with documents sitting out and over the documents were pictures of people being held in places, places that I had been the day before, behind barbed wire. It changed me and how I look at the world.”

Originally, the staff began in an office just one block from the current museum’s location. As the organization gathered more support from the local community and beyond, they have grown exponentially.

“When I worked in that office, we were cramped and there weren’t even any windows, and we had only about two full time employees,” Thompson said. “But to see the support from the community grow and to secure this space, and then we had an opening ceremony and to see the exhibit come about after years of planning, that was an incredible moment.”

The staff has had to adjust to their new museum setting and, as a result, alter the way they run their non-profit.

“The transition has been really interesting,” Thompson said. “For one thing, since we’re an educational non-profit, none of our staff really had a background in museums, so that was a huge learning curve to transition from outreach to visitor services. How do we make this space welcoming for visitors? Will we charge admission? Will we have volunteers or staff to lead tours? These were all questions we had to deal with at the time, and it’s still a work in progress, but we’re looking for ways to market the Center and make people know we’re here.”

With people now able to come to the Center to experience what the organization has to offer, the museum has also created exhibits for the community to participate in. Incorporating community interaction has been essential to their mission.

“The exhibits are developed mainly by staff with some consultation from outside people,” Thompson said. “It took us a while but we have almost 3,000 artifacts in our collection. We’re actually about to start phase two of the core exhibit, so we’ll be adding on contributions from other local organizations, like a group that works with survivors of the Japanese Internment camps and the Northwest African American Museum. We want to get other groups more involved and really share our stories here.”

Coordinating meetings with Holocaust survivors is another keystone that has allowed the Center to thrive. Although Thompson and her coworkers enjoy working with survivors, the task of setting them up to speak with students can be daunting.

“The most challenging part, but also the most rewarding, is scheduling our survivor speakers to visit schools,” Thompson said. “They all have very unique needs and we want to do our best to support them, and schools are a bureaucracy, so trying to match a survivor with a school in an engagement can be a challenge. We want the survivors to have the best experience possible and the same for the students, and as one of our most important programs, I’ve put most of my energy into that.”

Furthermore, the museum’s influence extends beyond sharing the experiences of survivors. The small staff is working with the Seattle Police Department to train officers on tolerance and hosts contests for young artists.

“We actually have a contest for students every year,” Thompson said. “It’s a writing and arts program and we received almost a thousand entries from students all over the northwest. We had a show here and a gallery display of the art and got to award the students.”

Thompson, Cohen and Elman are three pieces of a much larger puzzle; they want to share the stories of the past in order to enlighten those in the future.

“I want everyone in Seattle to know we exist and to visit the center, and understand that in our own community, we have people with very important stories from their own experiences,” Thompson said. “Because we don’t have much time left with these survivors, it’s vital to get as many people as we can to visit the center and pass their stories on.”