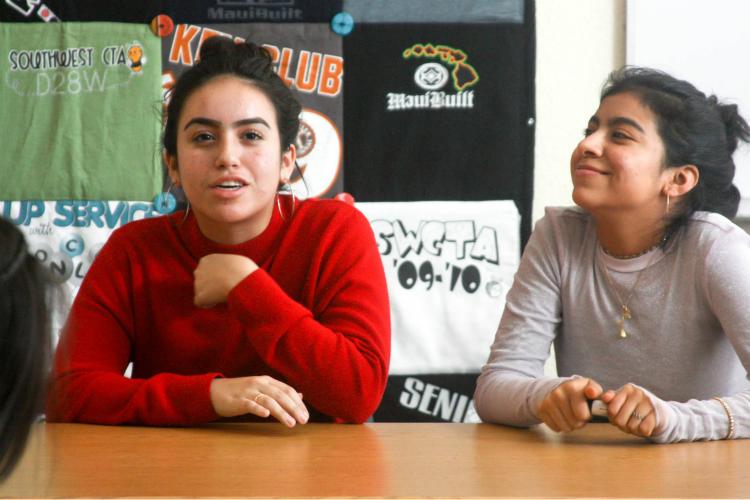 Sophomores Cecelia Gonzalez and Karissa Butler attend the first meeting of the newest group on campus, I Am That Girl. People of all backgrounds are encouraged to join and share their experiences.Photo Credit: Eriyale Williams

Freshman Studies teacher Laura Penrod is the adviser of a new student interest group, I Am That Girl. This group is a safe space for anyone to discuss female struggles, societal pressures and experiences with people of a similar mindset.

“I Am That Girl is a [group] to empower females to be strong, independent and assertive in who they are and their beliefs,” Penrod said. “I want to make it clear that feminism is not a bad thing. It is something that is to help females be as equal as all other people in our society–male or female.”

The idea for the group began during a PBL in Freshman Studies where students had to contact an organization and do community service for them. Freshman Sabrina Toledo reached out to the  I Am That Girl movement and was encouraged to become a chapter leader. Once the project was over, she continued volunteering with the organization and helped create the group for students.

“I loved the motive that I Am That Girl has behind their actions,” Toledo said. “They’re all about inspiring girls to be the best person they can be while also bringing them together. I think it’s a beautiful thing how women empower other women and I love the community behind it.”

The group’s first meeting occurred last week on March 7. At the meeting, students discussed ways to spread the word about their group and possible future plans.

“I think that the [group] is a great idea, because according to society females have to follow a lot more rules than males,” junior Christian Tran said. “There’s so much attention on females and the things they do, so this is a great way to empower them.”

While on campus, I Am That Girl plans to complete random acts of kindness for others, as well as start a social media account to spread empowering messages. They are also hoping to do community service that directly helps and impacts females.

“Personally, I feel like this is a great opportunity for females to get together and actually show what we can do,” junior Betty Guerrero said. “We’re all strong, but we can be stronger together and with the right support we can grow together.”

The next meeting will be on March 21, where members will start a book study and share quotes and messages from empowering females.

“It’s not a male bashing group; experiences are shared, but no negativity is tolerated,” Penrod said. “It’s all about lifting people up, not putting people down for any reason.”