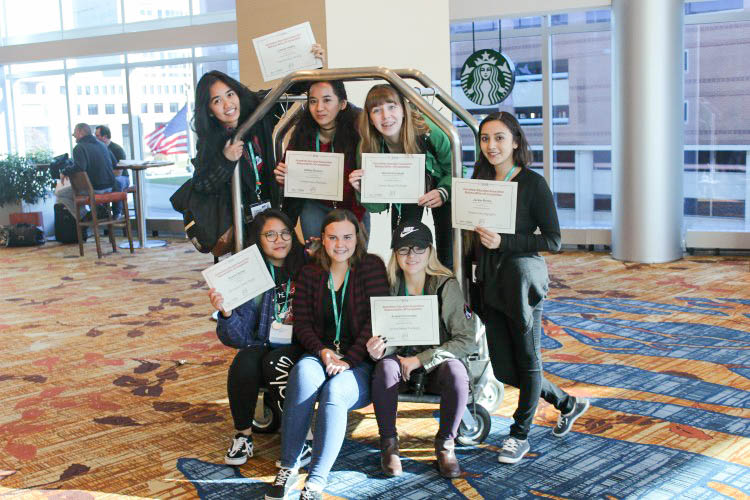 Journalism students with their awards in Indianapolis.

During the Fall JEA/NSPA Journalism 360 convention, the Southwest Shadow Staff took home first place for the third year in a row in the Best of Show category. The convention took place in Indianapolis, IN from Nov. 10-13.

“I did Online News Package, and I felt incredibly stressed because in previous years there was a lot more time but this year it was cut to four hours,” co-Editor-in-Chief Alexis Drevetzki said. “I was stressed for my group mates because I could tell they were struggling to get everything done and meet the deadline. Ultimately I think we did a really good job considering the circumstances so I’m really proud of us for placing and I’m excited to compete next year and do better.”

While in Indiana, the staff attended workshops taught by journalism advisers and professionals from across the country on skills in writing, photography and design.

“My favorite workshop was about Steps of Revision,” staff member Julia Cox said. “I feel like I could improve in that area and it helped me fix my leads. Since I attended that workshop I could possibly place higher in my next competition.”

With multiple buildings and parks surrounding the hotel, the staff went out to take photos during breaks. After workshops and dinner the staff went to Escape the Room and toured the Children’s Museum of Indianapolis.

“Bonding more with my staff outside of the classroom setting was my favorite thing from the trip,” co-Editor-in-Chief Althea Gevero said. “I think journalism trips are important because not only do we challenge ourselves but we learn how to become a stronger staff.”

New education tools introduced by teachers for virtual education sessions In order to resemble their regular classes, websites like Nearpod, Pear Deck, Socratic will be used

Not only did the staff win first place in Best of Show, they also received individual recognition. In total there were four Honorable Mentions and one Superior awarded.

“I competed in Online News Package and when we found out that we had won something I was super proud because it was a really hard process in making all of it,” Howl staff member Arielle Fernandez said. “I was even more proud of Althea, Alexis and I because it was my first time working with them but we all worked really well together.”