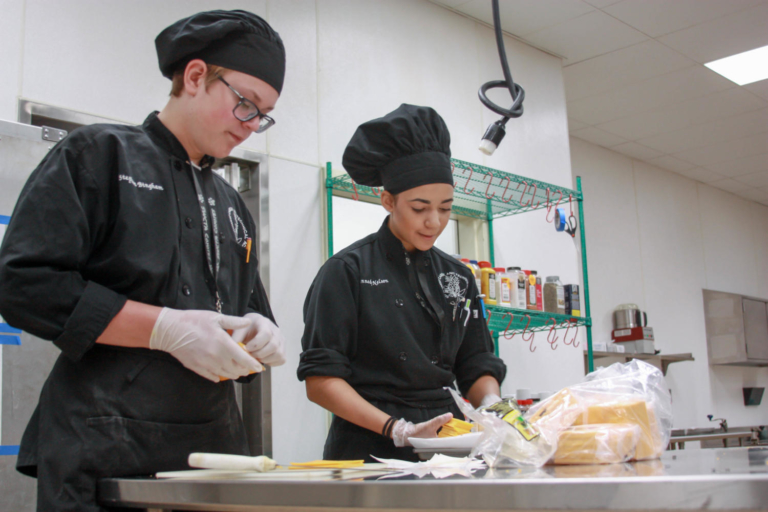 Preparing food for the Coyote Bistro, juniors Stefanos Bingham and Kennedy Nelsen slice cheese for sliders. Students were separated into different stations in order to prepare the food. "Having fresh handmade food at a good price is a big reason why the bistro is so successful," Bingham said. Photo Credit: McKenna Thayer

After a successful first two months in operation, changes to the Coyote Bistro menu have begun.

“We want to change our menus seasonally because just like any restaurant people get tired of different items so we are going to start with sliders and wraps and then we are going to move onto other things,” Munoz said. “We want to ask and monitor the student body about what they would want to see when it comes to our food and hopefully we can make those recipes come together and implement a little bit of food from every culture that we have here in the school.”

Recently, the bistro has substituted chicken and bean burritos for buffalo chicken wraps. Instead of selling breakfast items like previous years, the bistro continues to focus on lunch items.

“Students should come to the Coyote Bistro because it gets the culinary program involved in the school and it gives more variety for lunch options for the students,” Munoz said. “I want to step out of the box and teach some of these other cuisines that most students have not had the opportunity to work with.”

Previously named “The Coyote Café,” it first opened in 2014, but according to Chef Munoz, it failed to operate consistently.

“In the past, we have done this in the morning and it usually doesn’t work out because students don’t want to wake up early or don’t have rides but by doing it during lunch students are already here in school and they are ready and enthusiastic about it,” Munoz said.

Profit made from the bistro will be used to reinvest in product for the program and possibly new equipment. Chef Munoz and culinary students hope to continue the bistro and add new varieties of food as the school year continues.

“In one day of running the bistro we make usually around $800 from the two combined lunches, which is less than a hour in service,” senior sous chef Kaitlyn Combs said. “I think the reason it is so successful is because our food is different then what you can get at the normal cafeteria and ours is actually hand made and fresh.”