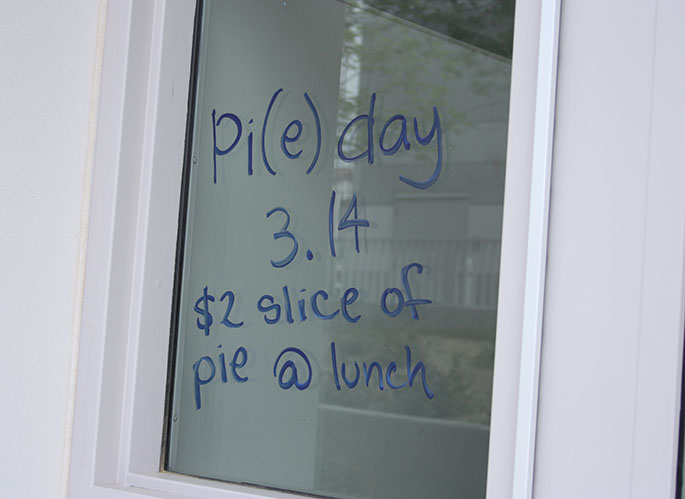 Student Council recently announced that they will be selling pies in celebration of Pi(e) Day, a reference to the mathematical term which corresponds to the date, 3.14.

“I just thought it was fun and kids always ask at the beginning of the year ‘Are we still going to have Pi(e) Day?’ and I’m like, ‘Absolutely,'” StuCo adviser Ms. Mirya Julian said.

This is the second time during the year when StuCo sells pies–they’re also available to order before Thanksgiving break.

“I started it because I thought it was a really fun idea to serve pie on Pi(e) Day,” Julian said. “When there hasn’t been school on Pi(e) Day, we’ve done it the Friday before or Monday after.”

Slices of pie will be available to purchase for $2 on March 14th during first and second lunch. There will be a variety of flavors such as lemon meringue and banana cream that students can choose from.

“I’ve been able to participate in Pi(e) Day all four years that I’ve gone here,” senior Dakota Jersic said. “The whole idea just correlates, so we thought it would be a fun idea for the student body.”

StuCo has been hosting Pi(e) Day for seven years. It also serves as an additional fundraiser for the program throughout the year.

“The money will go towards making the school better and for events such as Coyote Games or Coyote Coachella,” Jersic said.