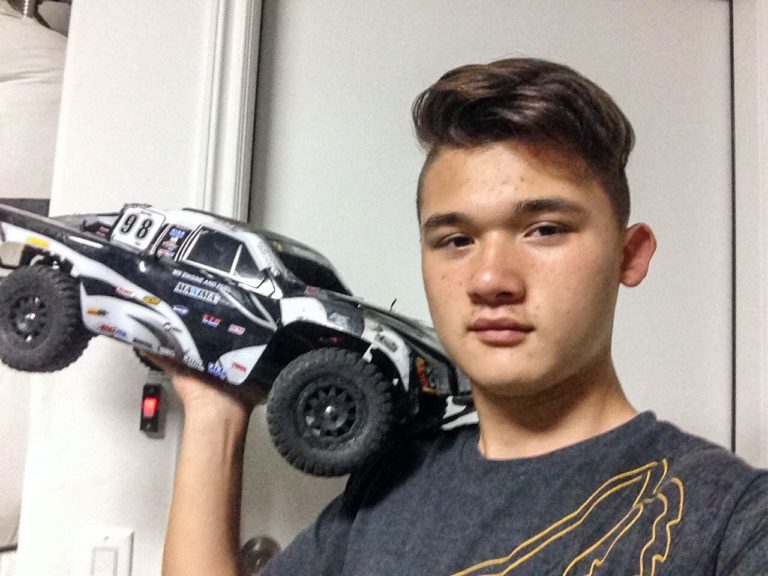 Bumps and tunnels are scattered all around the track as trucks and cars zoom over them. The owners of the cars surround the outside of the track with remotes in hand and fingers quickly moving over the buttons. Leaving other cars in the dust and going approximately 100 mph is the Traxxas slash 4×4 VXL, which is being controlled by freshman Logan Ly.

About four years ago, Ly was introduced to RC car racing through a friend and YouTube videos.

“When I first put my RC truck on the track, I thought it was crazy because my truck had so much power and it was so fast that I would break parts on the track,” Ly said. “It was a continuous process of me putting money towards the truck and replacing tires.”

After controlling his own truck for the very first time Ly was hooked on RC racing and feeling the adrenaline rush that comes from racing with others kept him going.

“I race RC cars every weekend because it keeps me happy and racing the RC trucks helps keep me on my toes,” Ly said. “It’s very hard but it teaches me self discipline.”

Depending on the make and model, RC cars and trucks can range anywhere from $60 to $12,000. Ly has a total of two trucks, but his Traxxas is fully customizable and made for off-road racing.

“Off road racing uses dirt, clay and a lot of ramps while on road racing is a straight road that uses asphalt and requires special tires,” Ly said. “When I first got my RC truck, I thought I was crazy because I spent around 500 dollars for a brand new off the shelf truck.”

Over the years, Ly decided to customize his truck and make it his own. He started adding and replacing parts in order to make his truck the fastest.

“As the years have passed, I’ve replaced the motor several times because it’ll burn up my tires,” Ly said. “My truck is able to go up to 115 mph because I replaced the tires and electronic speed control. Also, the chassis of the car is trimmed to fit my gearing setup and tires.”

After practicing almost every weekend at the 702 RC Raceway, Ly has learned a few tricks for his truck. Since his car is custom made, it can perform tricks other trucks can’t.

“My truck can pop wheelies and do front flips and backflips,” Ly said. “It didn’t take very long for me to learn the trick, because all you are using is gas and brake or reverse in mid-air to do tricks in the air.”

While there are competitions for RC racing, Ly chooses not to participate and focuses on having fun instead. To him, the most important thing about RC racing is the speed of his truck.

“I never competed with my truck because it has so much power,” Ly said. “I wouldn’t even be able to use the truck in any races, because I’m so fast that it will pop wheelies and the truck would flip all over the place.”