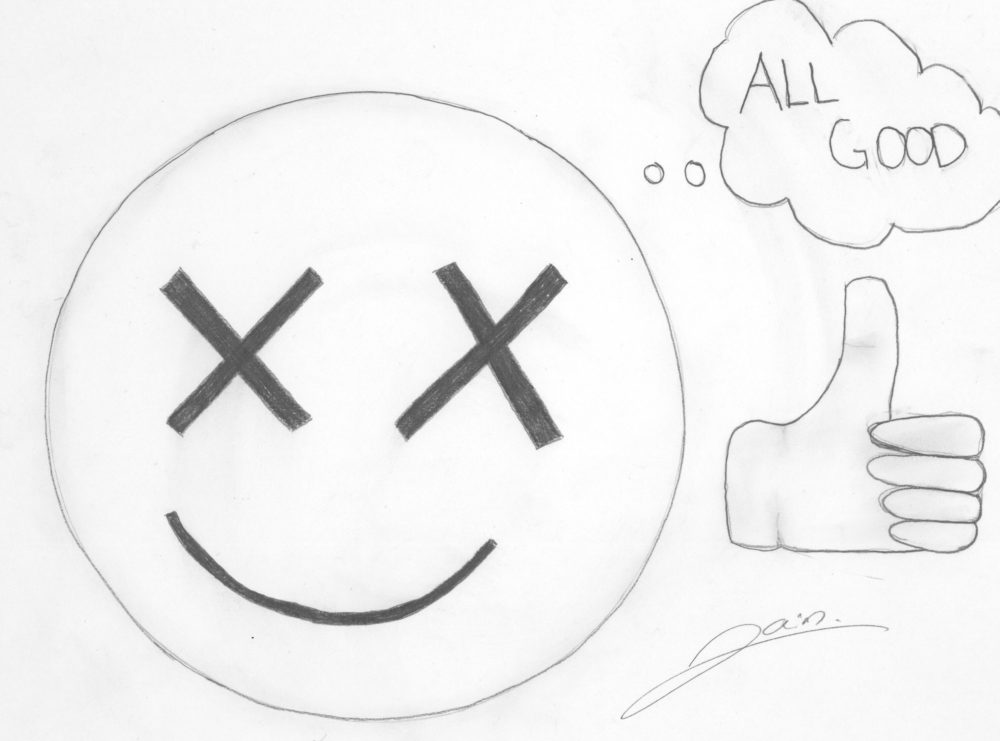 Stepping off the field

Adrenaline courses through junior Dustyn Weber as he runs up and down the field. The ball is kicked around the grass as his opponents take it to their goal. More than halfway down the field now, he makes his way to his opponent and moves for a slide tackle. He’s met with instant pain in his knee. Almost immediately he falls to the floor, kneecap slightly sticking out. Before the game continues, he’s escorted off the field and examined by a doctor.

Upon further inspection, it’s clear; he tore his meniscus. In the weeks following, Weber undergoes surgery, crutches, a brace and physical therapy.

“When I was injured I couldn’t stop thinking ‘I won’t be able to play anymore and I have to have surgery,’” Weber said. “It was hard at first– all the waiting and losing strength was really hard on me. I had to take it slow but eventually I got back to it and it was fun until I got injured again.”

According to the National Center for Biotechnology Information, nearly 45 million students participate in athletics, and this number is increasing. Of these athletes, approximately two million high schoolers are affected by a sports-related injury each year.

“I have torn my labrum (a muscle in my shoulder), one of my abdominal muscles, strained my hip and sprained my ankle a few times,” junior Moira Johnson said.

Student athletes are at a higher risk of injury due to their bodies not yet being fully developed. Adolescents have less flexibility and coordination, and because their bones are still growing, their tendons, ligaments, muscles and bones are at an increased risk of injury.

“There was one time where I was running to get a tackle and I was actually really close to tearing my ACL,” junior Ryan Daley said. “It would’ve been really bad since it would take me out for the year.”

Additionally, 67 percent of injuries occur during practice, most likely because parents enforce fewer rules than they would during an actual game. Also, over half of sports injuries stem from overuse, but they aren’t strictly related to this– students also experience heat exhaustion and concussions.

“I’ve actually had a concussion before but I caused it myself,” Daley said. “I hit someone with my head and it really sucked. Not only did I have headaches all day but I would randomly get dizzy during the day.”

From broken bones to a torn ACL (anterior cruciate ligament), sports injuries can occur all over the body. While some injuries are only minor, others can involve surgery, stitches, crutches and weeks away from the game.

“Occasionally, I have a major injury such as diving and cutting myself and having to get stitches or straining a muscle in my throwing arm,” sophomore Zach Kriethe said. “Overall though, I am somewhat lucky because my worst injury isn’t that serious or debilitating compared to more serious injuries that people and friends I know have.”

Kriethe is a baseball player, and one day as he was getting ready to throw his pitch, his arm was met with a burning sensation and a strained muscle.

“When I was injured it wasn’t a constant pain, it was just certain movements that caused the pain,” Kriethe said. “For example, when I strained my forearm it didn’t hurt unless I threw or made the throwing motion.”

In another contact sport, sophomore Alex Machado broke her finger attempting to catch the ball when the girl in front of her grabbed her hand, twisted it and then stepped on her finger.

“When I broke my finger, I didn’t tell my coach because there wasn’t a backup for my position so I still played the best I could,” Machado said. “I honestly didn’t feel much because of the rush and the adrenaline during the game. I just moved my finger so it wouldn’t get stiff, but after a while it felt like my whole finger was on fire.”

After tearing his meniscus during a game, Weber needed surgery immediately. In the next six weeks, he wore a brace to keep his leg straight and used crutches to walk around. Once those six weeks were up, he had to go through another six weeks of physical therapy.

“My leg gets locked at the knee because when you have a torn meniscus it folds over on itself, restricting the ability to bend it,” Weber said. “When that happens, it becomes really painful to move it. There is normally a sharp pain, and if it comes unlocked it feels really sore afterward.”

Injuries aren’t limited to contact sports. While at the gym, junior Trina Lehner moves all over the mats to practice her back handspring. Tumbling was one of Lehner’s favorite moves until she undercut her landing and broke her left arm.

The healing process can take weeks to months depending on where the injury occurred. Minor injuries, such as sprained ankles and broken fingers, can take a few weeks to heal, and major injuries, like broken arms and muscles tears, can take months to fully recover.

“When I went through physical therapy they had me moving my arm in different directions and trying different movements,” Lehner said. “My arm was really stiff but after some range of motion exercises I was good to go.”

A few days after he tore his meniscus, Weber was under anesthesia for a 30 minute surgery. Since there were no complications, he left the hospital a few days later and was put on crutches for six weeks.

“Having surgery and wearing a brace really sucked,” Weber said. “The brace was always hot and sweaty and it was a pain trying to sleep with. Crutches weren’t too bad. I spun around on them a lot saying ‘look I can do tricks’ and then did a 360 without letting my feet touch the ground.”

Being stuck in a cast or brace means weeks of waiting, and often times, boredom.

But some athletes take this as a welcome opportunity to rest and come back stronger than before.

“Recovering actually felt good because I had allowed my arm to rest for a few weeks, and once I went to physical therapy, it was just to get my strength back and to be able to throw 60-70 mph pitches without my arm hurting,” Kriethe said.

For an athlete, taking time to recover is a period of waiting and itching to get back to the game.

“The healing process is really frustrating,” Machado said. “Almost all the time I would say that I just wanted to hurry up and get better already. It’s hard to wait for injuries to heal when you have things to do, especially when I had my football games and all I wanted to do was be in the game.”

The initial return from an injury can be met with apprehension, usually stemming from fear of causing the injury to happen again.

“At first I was kind of tentative because I was afraid I would re-injure myself, but after realizing that I wouldn’t and it was kind of a freak thing, I was super happy and relieved to be back doing what I love,” Kriethe said.

In addition, recovering from an injury also comes with mental repercussions. Potential athletic scholarships can disappear if a student doesn’t recover fast enough, they may feel inadequate, depressed, or frustrated or develop eating disorders. For some athletes, an injury is enough to call it quits.

“It’s why I actually quit cheer,” Lehner said. “I loved to tumble and after I broke my arm I was scared to tumble again, leading me to come to the decision that I should quit cheer.”

Lehner spent years practicing and perfecting all of her routines for her squad; and one wrong tumble led her down a path of fear and physical therapy.

“I tried to convince myself to go back many times,” Lehner said. “I went to one more tumbling class after I broke my arm to give it another try but I was scared. I tried telling myself that I could do it but mentally I just couldn’t get over my fear.”

But for others, passion for one’s sport overrides the fear, helping them feel more confident in their return.

“After my finger was better, I was still nervous to play because I didn’t want to hurt it again and make things worse,” Machado said. “All in all, I was overly happy because flag football means everything to me, so when I was told I could go back to playing, I couldn’t wait to get back on the field.”