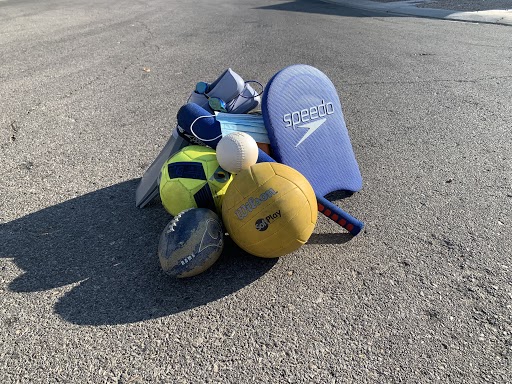 I know that the idea of canceling sports isn’t something people will enjoy, especially me. However, there isn’t a smart or safe way for athletes to go back. If we can’t find a responsible way to play sports, then they shouldn’t be going on. Photo Credit: Hannah Paine

In March, when quarantine started, many athletes were upset to find out their seasons had to be canceled or postponed. Questions about high school and college sports arose. Some teams were able to go back to their scheduled practices, but had to quarantine again. For example, Spring Valley High School’s football team had to shut down their summer program due to some players testing positive for COVID-19.

Athletes testing positive have occurred on multiple occasions, but that isn’t changing anything. The fact of the matter is coaches and public officials can try as hard as they want to make athletes follow guidelines, but it’s not working. Coaches are unable to keep athletes safe and if they aren’t able to enforce these rules, then sports shouldn’t be happening.

There are different ways that athletes have resumed practices. For example, athletes can do skill training, where they work on their own or with a partner, who would be six feet away, or individual practices with a coach. Athletes and coaches would much rather have full team practices and all have the same training style, which would require them to be close together, mask or not.

Even though coaches want whole team practices, many parents have stopped their children from rejoining sports to help minimize contact with others. People shouldn’t be leaving their house unless it’s important, so why would sports be any different? When it comes to younger children, parents have control over where they go, so if they don’t want their child to rejoin sports, they won’t let them. However there’s a substantial difference for teenagers.

Since teens spend more time at practices, they’ll come up with reasons as to why they shouldn’t have to wear masks. Many teams wear masks when arriving, but once practices start, masks are gone. This means the longest amount of time, when players are closest together, is spent mask-less.

Social distancing is also supposed to be enforced, but six feet can easily turn into six inches on the field. Recently I was driving home and passed by a soccer field hosting multiple practices and there was barely six feet between each team to be abiding by CDC guidelines. I was surprised when I saw the lack of care the players had, especially since they can be fined. I have a family friend whose team was fined because players weren’t socially distancing. Authorities can fine as many people as needed, but the cost of consequences isn’t making them listen.

Critics may argue that COVID-19 shouldn’t stop us from restarting sports. If the US started to see a decrease in cases, then I could agree-but we’re not. With a thousand Americans dying a day, allowing high school sports to restart very may well be  a death sentence for many people.

This isn’t just a problem for youth sports. There was much discussion about how professional sports could finish their seasons, and they came up with a plan that kept safety in mind. Professional athletes are in isolation, and can’t do anything but train or attend games. However, this would not work for non-professional athletes.

Young athletes have other things they need to focus on, including school, family or jobs. Many athletes had to make accommodations when quarantine started, so why can’t they make more now? I know multiple athletes that started home workouts and their skills have grown. These athletes haven’t rejoined their sport, and are worried about their future. Athletes could miss out on scholarships and their college plans could be drastically impacted. If sports were cancelled, personal training would prepare athletes for when it’s safe to go back and hopefully benefit their future.

I understand that many people want to participate in sports, but it causes a risk to public health and is untenable to do so at this time.