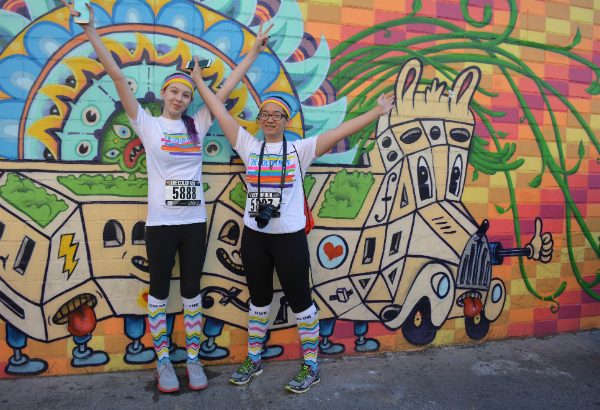 Althea and Alexis pose for a picture before the run begins. The racing materials that participants receive include a t-shirt, color packet and headband.

A unicorn prances by, stopping to take pictures with fellow participants. Runners with tutus and afros strut along the street. A participant with furry rainbow leg warmers preps for the race.

Welcome to the Color Run, also known as the “Happiest 5K On The Planet.”

The first race took place in March of 2011 and has held a tour every year since, to date having over 300 events in over 50 countries.

According to the Color Run website, “The Color Run was founded as an event to promote healthiness and happiness by bringing the community together to participate in the ‘Happiest 5k on the Planet’. We are the original paint race that has created new running event, which continues to grow.”

In addition, the Color Run partners with various charities, and has thus far raised $3 million to give to these charities. Some include Three Square Food Bank, Big Brothers Big Sisters and the Boys and Girls Club.

“It’s an awesome feeling knowing you’re running for charity. It feels good and makes it more worthwhile,” a participant said.

Prior to the race, participants receive a t-shirt, headband, tattoos, color packet (colored powder) and tube socks. The 5k itself includes five color stations: blue, pink, orange, yellow and silver. At the end of the race, runners and walkers alike receive a medal and additional color packet as well as the opportunity to enjoy music and more color thrown on their clothes.

“The best part was going through the colors and taking pictures so we can look back on the memories,” a participant said.

Furthermore, the event promotes three ideals: healthiness, happiness and individuality. Healthiness is achieved through participating in the run itself, as half of the participants are first-time 5k runners. One of the Color Run’s goals is to improve health and wellness and promote an active lifestyle.

Powdered rainbows shoot into the air and suspend their colors for a fraction of a second before gently falling back down, splattering runners with splashes of the vibrant colors. Founded in Jan. 2012, The Color Run is an energy filled event that has been staining skin, cloth and hair ever since.

The Color Run was held on Feb. 28, a cool, sunny Saturday in Downtown Las Vegas—starting on Las Vegas Boulevard, ending on Fremont Street and North Ninth Street and winding everywhere in between. The “Happiest 5k On The Planet,” as the event is affectionately dubbed, is open to people of all types; young, old, athletic or those who simply wish to join their friends and family in a remarkable event.

For two inexperienced runners such as Alexis and I, the Color Run was the perfect event to introduce us into the world of races. Since the run is open to a wide range of people, those who preferred to run the race were asked to stay to the left side of the course and those who preferred to walk (such as ourselves) stayed to the right, which is a detail that we appreciated.

The start of our morning consisted of gathering our materials for the race at check-in; the area was slightly crowded with many people walking about. The racing materials (which were included in the registration fee) included many wardrobe accessories and a color packet—all of which were high quality and blended together beautifully to create the ultimate happiness kit.

Squeezing in next to our fellow participants and listening to an upbeat announcer signified the next part of our morning. As runners were let off in waves from 8-9 a.m., we had to wait around half an hour before beginning.

Not only is this experience the perfect amount of exercise balanced with entertainment, but the whole atmosphere of the Color Run is one of positivity and happiness. Seeing people of all ages and types donned in flamboyant tutus and neon socks kept smiles and happy vibes with Alexis and I for the entire day. 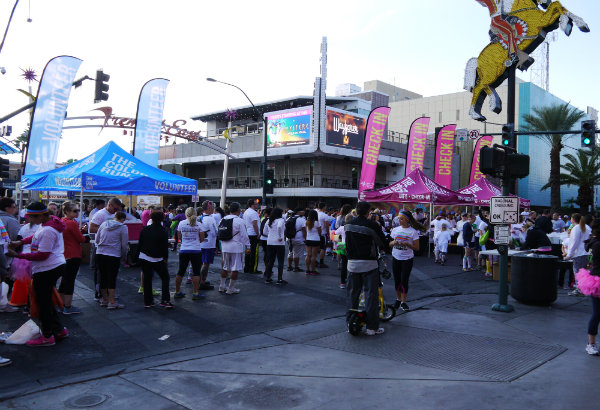 Check In
Volunteers, staff and runners mill about as they prep for the day’s events. Runners checked in and received their color kit items prior to the race. 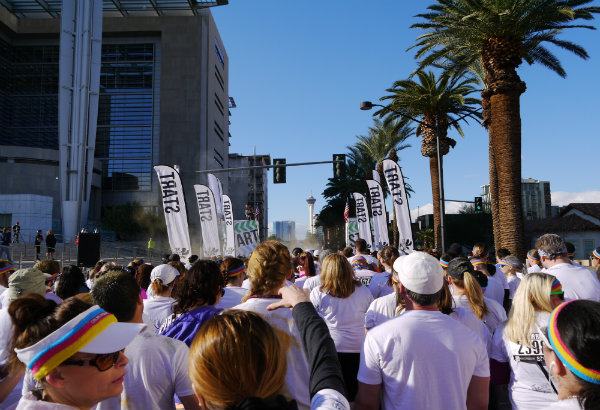 On Your Mark
Participants wait amongst thousands of fellow runners as they prepare for the start of the race. The runners were released in waves over a 60 minute time period. 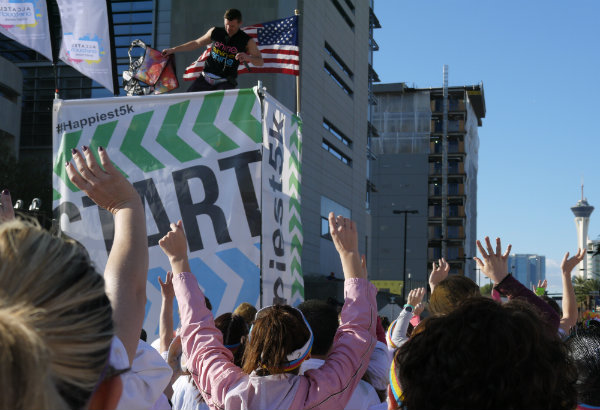 Get Set
The host of the Color Run pumps up the crowd before they are released. He had been throwing items into the crowd, such as bags, bracelets and shirts.

Go
Color Runners walk and run alike down the street at the start of the race. The majority of participants were still clean and had yet to be colored. 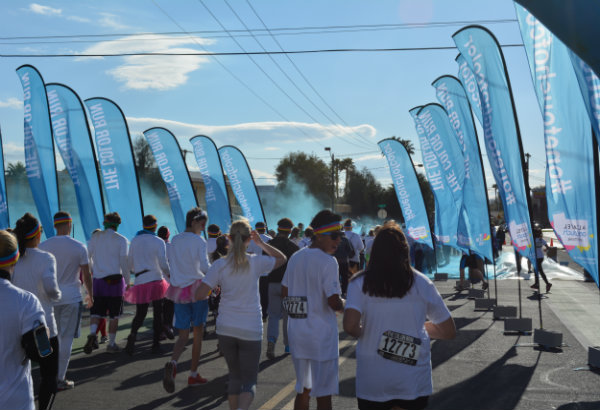 Blue Zone
A blue haze settles over the runners as they pass through the blue zone. This was the first color station participants ran through. 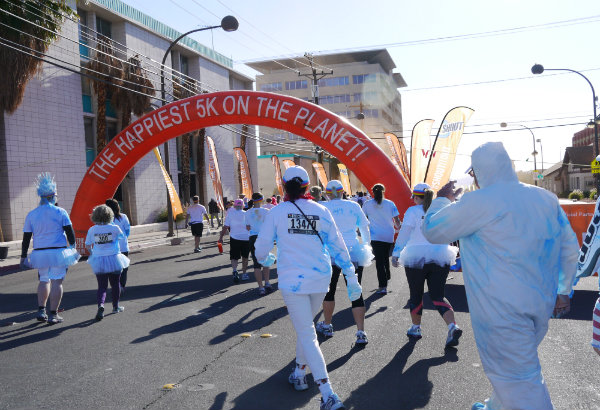 Orange Zone
Color Runners prepare to enter the orange zone and be dusted from head to toe in vibrant orange powder. The orange zone was the second color zone runners passed through. 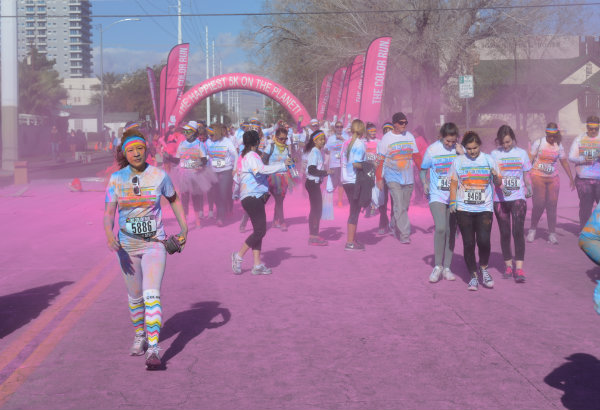 Pink Zone
Pretty pink participants escape the powder falling around them. The pink zone was the third station runners passed through. 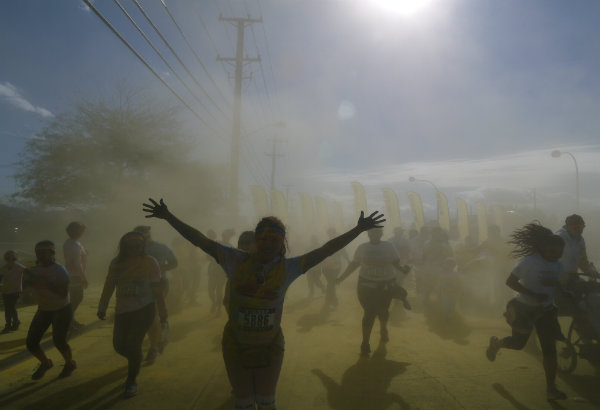 Yellow Zone
The yellow sun and yellow powder pour down on Color Runners as they move through the yellow zone. This was the fourth color station participants went through. 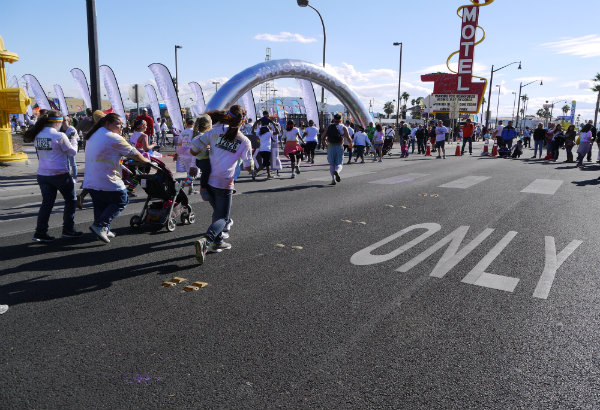 Silver Zone
Sprinkled with pink, blue, orange and yellow, participants begin to enter the silver zone. This zone was the final color station, exclusive to the 2015 Shine Tour. 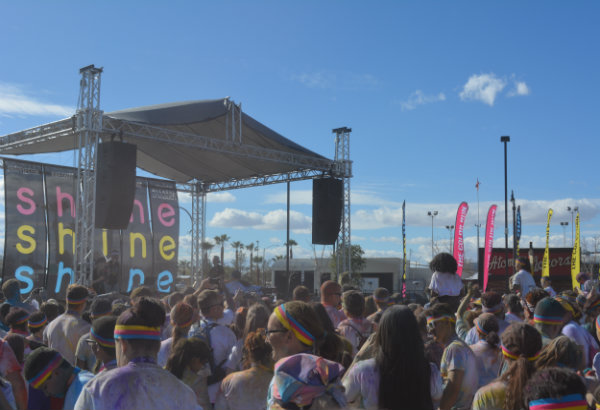 Party Time
The music is blaring and more colors are shot off into the air. After the race, participants had the opportunity to socialize with one another and splash more color around.
“This event is a lot of fun, it makes three miles seem like nothing,” a participant said.

Happiness is brought to the participants by simply attending. The run is targeted to people of all ages and fitness levels, and hopes to bring a smile to every participant.

“This event is perfect for all ages and it’s amazing,” a participant said.

Lastly, individuality is brought by the participants. Every person has a different reason for attending, bringing their own style and uniqueness to the race –whether that be through wearing a unicorn costume or hoping to give extra to charity.

According to the Color Run website, “Some Color Runners participate as a celebration of their healthy living, while others participate for reasons unique to them. The 2015 Shine Tour is designed to uplift and inspire runners to stand out from the crowd.”[/vc_column_text][/vc_column][vc_column width=”1/2″][vc_column_text]Around each kilometer marking, there were “Color Zones”; each zone represented a different color (blue, pink, orange, yellow and silver) and involved walking (or running) between rows of volunteers who cheer you on and enthusiastically douse you in powder. Each color zone contained positive, charming slogans; for example, the yellow zone had signs displaying “Hello Yellow” and “Follow the Yellow Brick Road.”

By the end of the race, Alexis and I were covered from head to toe in the stunning powder, smiling from ear to ear and with excitement pumping through us. At the finish line we received a slim gold medal proclaiming our accomplishment and extra powder; in addition to the beautiful madness, a concert took place with more bursts of color reaching into the sky.

In terms of pricing, the run generally costs $39.50 for individual runners and $29.50 for team runners (those who join in groups of 4 or more). All in all, participating in this event with my best friend was definitely worth it, and proved that the Color Run is truly the happiest 5k on the planet.