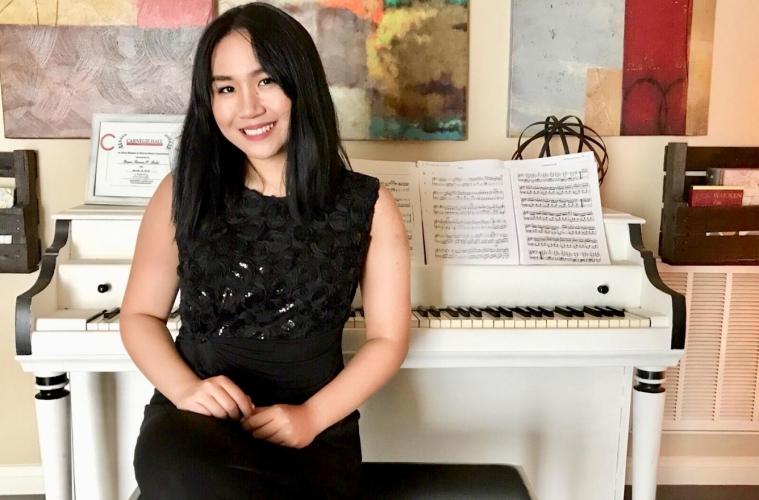 Traveling around the world to convey her talents, sophomore Theresa Balisi pleases and entertains listeners with classical music. As the head piano player of both UNLV and LVYO, it has made her one of the top pianists of the West Coast. “By being able to play at [Carnegie Hall], it had set me out into believing that I have an endless amount of chances to do something I have a true passion for as long as I shoot for it,” Balisi said. Photo Credit: Megen Lopez

As she sat upright with her fingers gracefully hitting the keys and the distinct sound of a piano emulating in the room, sophomore Theresa Balisi plays one of her favorite pieces, Piano concerto No. 17 in G. Balisi ensures she precisely strikes the right keys to ensure the song she plays contains no mistakes.

Starting with Disney’s Fantasia and listening to musical pieces at a young age, it sparked an interest in Balisi, causing her to play songs similar to those she was fond of. Inspired by the movie, she began to play piano and was taught by one of her cousins who is also an outstanding pianist.

“Getting to be exceptional at something that I have a deep love for is amazing yet, my true ‘gain’ from [playing piano] is finally getting to perform and share music in front of people while noticing a positive impact I’ve made on them,” Balisi said.

Balisi has been playing the piano since the age of four. Being the head pianist at UNLV, she was invited to perform at Carnegie Hall in New York in front of thousands of people.

“Performing at Carnegie Hall was honestly something that I thought was impossible with someone at my age, but was one of my largest goals I wanted to accomplish,” Balisi said. “When I was scheduled to play there, I felt like it opened up my eyes to more opportunities that I thought I couldn’t achieve.”

Traveling around the city, as well as the world, enables Balisi to express her abilities to people of the same skill level as well as beginners and professionals. She went on tour last summer with the London Symphonic Orchestra visiting Rome, Barcelona and France.

“Traveling around the world opens up my eyes to new things and it lets me know that there’s places outside of Vegas that are impressive,” Balisi said. “It also gives me an insight of a lot of various cultures, music styles and people.”

Although playing the piano can be difficult at times, it has taught Balisi numerous skills such as multitasking, memorizing a large quantity of information and improving her coordination.

“The biggest challenge I’ve come across with this piano ‘profession’ is trying to find my own style or voice,” Balisi said. “In the musical world, a lot of artists try and establish they’re on distinct ‘sound’ or playing technique in which they’re known for; that’s something I’m trying to achieve.”

While some people may have known Balisi for a short while, family and friends have been by her side through her pursuit of being a pianist.

“When I met [Balisi] in sixth grade, she was already a great piano player, but I never thought she’d be able to perform at a place like Carnegie Hall,” sophomore Donovan Co said. “Every now and then, I’d see and listen to her play piano and it seemed like every time I heard her play, she got better and better.”

With the amount of time and dedication Balisi has put into her profession, she is rewarded with satisfaction and happiness. As she progresses more with her passion, she’ll surely become a master at work.

“Sharing my musical accomplishments in front of a crowd and seeing them enjoy or entertained is simply an extraordinary feeling,” Balisi said. “Despite the several tiring hours of practicing and music classes each day, it truly pays off once I get to see someone attaining a positive reaction to the art of the music I play.”