Adept figure skater: Meet Aaliyah Lauder Cutting through the ice one stride at a time 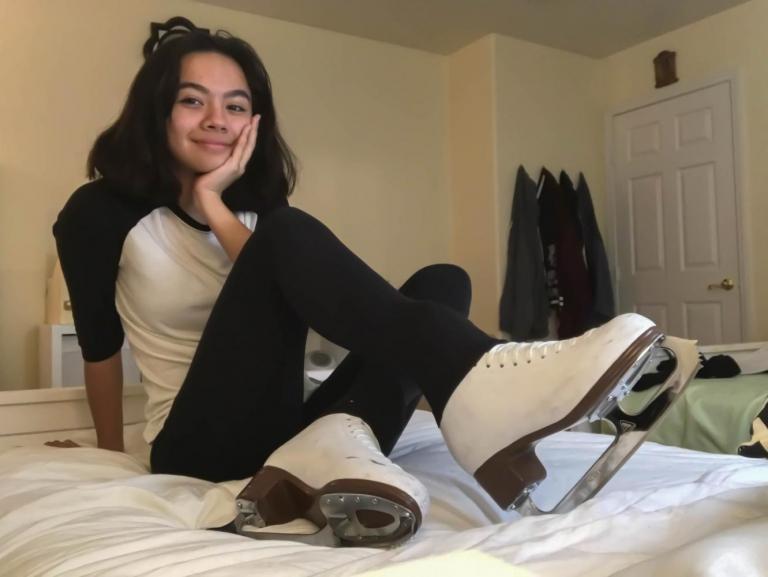 Taking her figure skating skills to the next level, sophomore Aaliyah Lauder hopes she’ll perform in front of an audience by the middle of next year. Lauder has been skating since spring of this year. “I like to go ice skating with my friends because I they often want to see how I skate and I can teach them some tricks if they want to learn,” Lauder said. Photo Credit: Aaliyah Lauder

Gracefully moving to the beat of the music and swiftly gliding over the ice, sophomore Aaliyah Lauder performs a routine that she has been practicing for several weeks. The sharp edges of the ice skate allow her to perform various tricks such as the 3-turn, backspin and counterturn.

Inspired by her best friend William, an avid figure skater who first taught Lauder the basics of skating, she decided to try the sport for herself. She also looks up to Johnny Weir, a two-time Olympic figure skater who has won bronze medals.

“I started figure skating around March of this year because I grew a strong love for watching the sport,” Lauder said. “I admire how elegant and beautiful the skaters look when they perform.”

While she is a relatively new to figure skating, Lauder is currently learning advanced tricks such as the toe loop and scratch spin. When she’s out on the ice practicing, she conveys any feelings that she experienced throughout the day.

“Before I start competing, I want to learn and master more tricks that I can use in competitions like the Desert Ice Open,” Lauder said. “When I’m on the ice, I sometimes feel jealous when I see younger skaters that are incredible, but I do feel proud that I’ve gotten pretty far into the sport.”

Practicing at least twice a week for at least four hours at the Las Vegas Ice Center, Lauder hopes her skills will quickly develop. Her family and friends support her by watching her practice as well as trying to learn tricks while out on the ice with her.

“Being a hockey player, I have experience on the ice, but I don’t look as graceful or swift as she does,” junior Jake Jernigan said. “When I see her practice, all her moves look smoothly coordinated and precise.”

In hopes of becoming a professional figure skater, she plans continuing to pursue her passion and improve her skill set.

“[Figure skating] impacts my health in a positive way because I’ve been watching what I eat and I have been maintaining a good weight,” Lauder said. “It’s a way for me to take my mind off problems and it’s just a really fun sport for me that I can express myself in.”