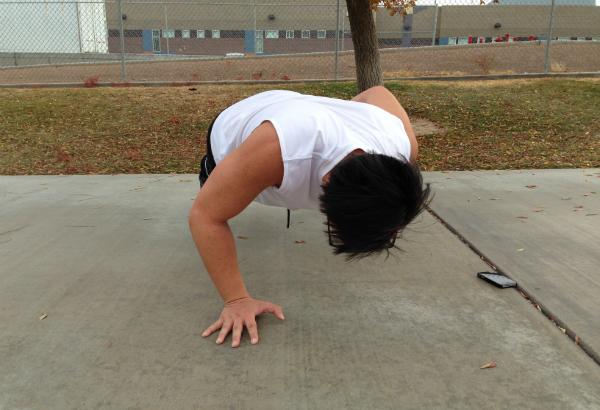 Junior Karel Saquing practices his one arm push-ups, the final phase in the push-up progression test of calisthenic exercises. Initially he worked on weight-lifting but recently switched to calisthenics to achieve practical strength. “I’ve become more dedicated and committed. I’m better at prioritizing, and I am better at managing my time and motivating myself,” Saquing said. Photo Credit:

At one point, a mile for junior Karel Saquing felt like it stretched into ten miles, and consumption of unhealthy foods furthered the early stages of heart disease. According to the body mass index (BMI), his weight did not reflect his height. Now, he is becoming the epitome of BMI standards.

Through perseverance and commitment, Saquing sheds the remnants of his past with bodybuilding and calisthenic exercises. Calisthenics, or body training, incorporates your own weight to build muscle, which includes push-ups and pull-ups. While sculpting his physique and training his endurance, he balances his diet with healthy, proportional meals.

“I strive for a personal change that is internal first and then reflected through how my body looks,” Saquing said.

Before taking the initiative to commit to fitness, Saquing allowed his temptations to regulate his food consumption, causing his body’s weight to peak at 240 pounds. Over the years, he slowly dwelled into the early stages of cardiac diseases.

“I ate food carelessly. It was more for satisfaction than nutrition. I was a glutton; I didn’t appreciate food enough so I ate it in high volumes. If it tasted good, I ate it,” Saquing said.

Although Saquing lived within a vibrant community, the lack of transportation and commitment deterred him from going to the gym. After moving to another residential area, the opportunity became more apparent, as it offered a public recreational center.

“At first, fitness was a convenience. The apartment complex I lived in had a gym available for free to residents. Over time, fitness became a commitment and I began to research fitness in-depth using books, videos and any resource available to me,” Saquing said.

While he did expose himself to what the gym offered, Saquing went to his recreational center only a few days a week. By recognizing his flaws and understanding how he could improve himself, he established a more consistent schedule fueled by newfound incentives.

“I had many things motivating me: my girlfriend, my vanity. I wanted to be happy looking in the mirror—but it was mostly my new year’s resolution. I made the same resolution for almost seven years but never actually went through with it. In December I broke my leg and didn’t get the cast off until mid-January. With the cast off, I didn’t have excuses anymore,” Saquing said.

To produce desirable results, Saquing could not rely on only one medium to achieve his goals. Proficiency in multiple areas, such as form, procedure and diet provided him a stable foundation and effective use of time.

By consulting with his peers, he obtained information vital to refining his workout routines and diet.

“My form was simplistic and didn’t give me all benefits I could possibly have, so change was necessary and inevitable. It’s mostly to maximize the results and limit injury,” Saquing said.

Food intake becomes an integral aspect of redefining one’s life. Because Saquing was trying to diminish the size on his body, he abandoned the habits adopted throughout his life.

“I had to start cooking my own meals because the food my family cooked would only hinder my progress or negatively affect my health. I had to avoid donuts, cinnamon rolls, a lot of pastries and any kind of potato chips. The idea of no more sweets or chips killed me the most,” Saquing said.

As Saquing progressively filtered his body of unhealthy substances, he turned to more nutritious alternatives.

“For my cravings, I had to replace them with fruits and vegetables. As for the rest of my diet, I made the necessary adjustments. Watching calories is mostly watching serving sizes. First understand your metabolism and accommodate your caloric intake based on your goals. Since I wanted to lose weight I had to be on a calorie deficit,” Saquing said.

Fortunately, Saquing surrounded himself with people who encouraged him or offered their assistance so he would not pursue his goals blindly and inefficiently.

“My brother has always been an athletic person, and rivalry is natural between siblings. He motivated me to improve. I also had a friend from middle school who spent a lot of time working out, so he helped build my interest and knowledge on fitness. He told me what not to eat, when to eat to keep my metabolism active, and gave me advice on proper procedure and form to increase the results,” Saquing said.

However, his experiences of his first trips to the gym allow him to recall the lingering memories.

“Everything hurts in your body, and your movements add to the pain. Even sneezing hurt. Living normally was an ordeal after your first workout. Time goes by slowly when you’re in pain. It’s torture but only at first. Eventually the torment of pain becomes a welcome feeling. Doing nothing becomes a type of soreness that is intolerable. Pain and comfort eventually switch feeling,” Saquing said.

“First, I lost 60 pounds, my frame is more broad, my posture improved, my waist size has gone from 38 to 32 and my muscles are more obvious than my fat, instead of the other way around,” Saquing said.

Saquing offers his insight that is not only targeted at fitness, but also applicable to any aspect of life.