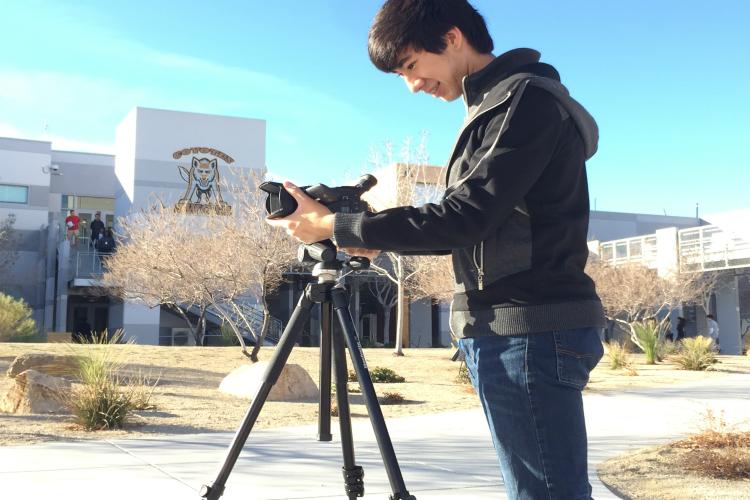 Days spent scratching his head for ideas, hours spent rehearsing and filming, sleepless nights spent editing. This is the life of senior Jaden Bailey. His interest in cinematography has fueled a passion for video production.

Since a young age, Bailey has loved being behind the camera, thinking of video ideas and making them come to life. With the help of YouTube and generous birthday gifts, Bailey has been filming and editing his own videos, which has lead to the creation of his own content such as “HomeRoom.”

“In 2007 a friend introduced me to this new website called YouTube,” Bailey said. “I became determined to one day become a video entertainer and was obsessed with getting the right equipment. It wasn’t until about 2011 when I started experimenting with video editing and actually making videos. Come 2012, I saw Video Production was an elective here at Southwest and took the class without a question.”

Bailey’s motivation for video production has led him to create his own show titled “HomeRoom.” In this show, he has free reign over the sketches and skits he opts to produce, ranging from comedy bits to gaming videos.

“Over the summer I had lunch with Mr. Rizzo and he presented the idea of me having my own show after the show,” Bailey said. “The offer was made because of my work; I saw it as a great way to finally start making sketches and all kinds of other films that I otherwise wouldn’t have been able to do on the normal news show.”

As for future episodes, Bailey and his collaborators have come up with sketches that include being locked out of a house as well as gameplay videos.

“I hope to actually be able to take the show past high school, possibly becoming something official like Homeroom Productions,” Bailey said. “We all still want to make sketches and films and want to continue uploading to our current YouTube channel.”

“The most rewarding moment was possibly my ‘King of Games’ commercial,” Bailey said. “I still remember seeing Snapchats of people recording their classroom’s reaction and I even heard classes start to cheer when it aired for the first time.”

Bailey can still recall his first commercial that aired; he learned people will react in all different ways.

“My first commercial to run was for the ‘Penny Wars‘ event,” Bailey said. “It felt so great to have a commercial up there and I received such a great response from that. But I’m more aware of how differently people take comedy. Now, regardless of the reaction from others I remember how much fun it was to film and edit and I know there are people out there who love the outcome.”

Those close to Bailey agree he has potential to go far with his humor and creativity.

“Jaden combines strong editing background with a whimsical sense of humor to create commercials and short films that people really enjoy,” Broadcast Journalism teacher Mr. Tom Rizzo said. “I am especially happy with the commercial parodies that he has created for our morning show. He has won awards for his work, and I know that he is going to do really well as a film maker after he leaves high school.”

Although Bailey has interests in other areas, he feels video production is where he is meant to be.

“It’s been apart of my life and inspirations for so long that it’s weird to think of a life without it,” Bailey said. “I’ve become very passionate with video game design as well and I am actually interested in pursuing the field, as well. It’s good to have multiple tricks up your sleeve.”

Overall, Bailey is thankful to have found this interest so early and have the opportunity to learn the trade as well as have those around him provide support.

“I’ve become closer to a lot of friends because of video production,” Bailey said. “Some of my favorite weekends are ones when friends come over and all we do is make a film, whether it’s a commercial or sketch. It has also let me find something I love to do early on. I have family members and councilors telling me how lucky I am to have found such a passion and talent so early on, and I’m just so thankful for that.”