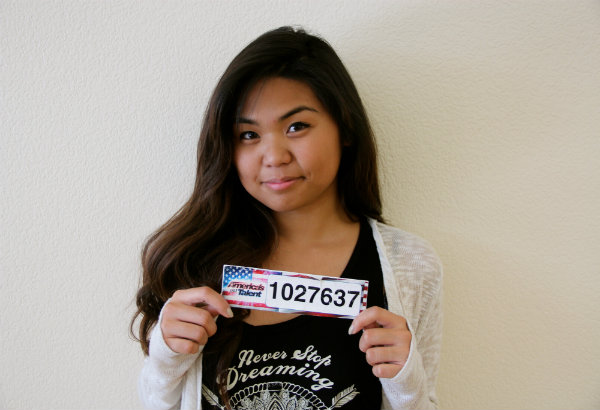 Proudly holding up her audition number is senior Aundie Soriano. Soriano had auditioned for the show America's Got Talent; her talent being singing. “I hope to keep performing in front of others as well as grow from this experience that can help me learn more about myself and experiment with my voice,” Soriano said. Photo Credit: Aundie Soriano

“I decided to audition when I knew that I was confident enough to do so. I chose this show because the auditions were placed in Las Vegas and it was more convenient for me, unlike others where I’d have to go to Los Angeles during the school year,” Soriano said.

Soriano’s passion for music began when she was just a toddler. As she discovered the world of music, she began to notice the melodic sounds her voice could make.

“Singing has been a hobby of mine ever since I was a little girl, but middle school was when I became more interested in having a music career. I took choir as my elective and every year I took on a solo, which made me really like performing in front of others. Eighth grade was when I developed the desire to audition for America’s Got Talent,” Soriano said.

After taking the leap and signing up for the audition, Soriano had to face the judges. She rehearsed constantly to ensure her performance was up to par.

“There was only one judge for this round, and I don’t really have much of an opinion about her. She did comment that I looked like Pocahontas. Overall, she gave each of us time to introduce ourselves and 90 seconds to perform our acts,” Soriano said.

[vision_pullquote style=”1″ align=””] I heard a ton of people practicing in the hallways, waiting room and even in the restroom. I can’t really compare myself to all of the other acts, because all of the performers had a different approach for their audition. [/vision_pullquote]

Due to grouping, Soriano was able to see the numerous other acts and compare her performance to theirs.

Upon hearing the other acts, she felt she did not compare to their performances. However, once she stepped up and sang her piece, she felt more at home amongst her fellow auditioners.

“I was the fourth one to go out of my group, and after hearing the performers before me I had goosebumps running down my arms. There was a duo that went before me and they had an original song and it completely blew me away. I became more nervous than I already was by that point, but after I calmed down a bit and performed I was pretty happy for the end result,” Soriano said.

Furthermore, Soriano experienced first-hand how the audition is nothing compared to what it appears to be on TV.The wait is much longer and the actual audition is fast-paced.

“The wait was definitely longer than I expected. After registration, I waited in the hallway with my sisters for about six hours. However, the audition itself went by quickly. The judge got through six of us in a group under ten minutes,” Soriano said.

Moreover, Soriano received tremendous support and love from friends and family. Each of them supplied encouragement and advice to help her through the rehearsal and audition process.

“Aundie is an excellent singer and has a great potential for a future career in singing and I believe in her and all her capabilities,” senior Brian Saunders said.

Now, she must wait another few weeks until she returns for her follow up audition. Due to the high number of contestants, there are several rounds in the audition phase before the performers that will appear on TV are chosen.

“I’m really excited for her and I know she’ll do great at her second audition and hopefully, she’ll be able to make it all the way to the TV performances,” senior Wen Lu said.

Overall, Soriano hopes to pursue singing as a career, as it is what she loves to do. What started as a hobby has now led to auditions on national television shows.

“Just the experience is probably enough for me, but I hope to advance into the next rounds of auditions and get into the actual show. It would be such a great opportunity to be able to perform in front of a big crowd and be able to show the world my talent,” Soriano said.